Following a six-month search process led by the NMHC Officers, Sharon Wilson Géno has been unanimously selected to take the helm from long-time President Doug Bibby.

Ahead of Sharon’s January inauguration, she sat down with NMHC Chair Ken Valach to chat about her background, why she chose to take on this role and next steps for the transition. Watch the video for the full discussion or read on for conversation highlights.

Ken: Sharon… tell us a little about what brought you to us?

Sharon: Thanks Ken, and I'm humbled by that introduction. Housing has been my whole career and I've had the opportunity to work on various sides of it, first as an advocate as well as a housing lawyer, a consultant working on multiple housing deals, but most recently as you mentioned at Volunteers of America National Services, which is one of the largest nonprofit affordable housing developers in the country. We operate 13,000 units in 40 States, District of Columbia and Puerto Rico. I have a lot of experience being in the nitty gritty of the deals. And much of the work of both our organizations right now – as well as the organizations that I've worked for in the past – has been in the mixed-income, mixed-use space. So, I've had a lot of experience to really first-hand understand the challenges that NIMBYism and some of the policies on the ground can have in developing and increasing the supply of housing that's so desperately needed in our country. That’s why coming here was really an opportunity for me to come full circle and take those lessons that I've learned and bring that voice to those in Washington—and at the state and local level to some extent as well.

Ken: Maybe you can say more about that. Why NMHC and why now?

Sharon: Again, I think we're just at this critical moment. I have been a student of housing policy also for many years and if you look back on how we got to this point. It's because we haven't had as cohesive of a housing investment in our nation. Over time we've used “this tool over here” and “this tool over there,” and we've all – as practitioners – pieced those together for a very long time. I remember many years ago going to the Hill and going to legislators and state and local houses and trying to talk about housing and they really weren't very interested. Now, the remnants of not making those overall investments over time have come to roost and everyone is talking about housing. It's on the lips of every politician of every community that I've invested in. This is truly a time where an organization like NMHC, who has always been playing in this area [as the voice of the] practitioners to help us turn a corner here. So when this opportunity came to me, I could think of no better thing to do than to be part of that conversation again And I'm really flattered to have this chance.

Ken: You're officially coming on board in mid-October. And I know that many of the members who are going to attend the September meeting will have an opportunity to meet you there firsthand. I also know that Doug is excited to take you on a road show to meet members around the country. What else do you think the first few months will look like for you?

Sharon: I think it's really going to be two-fold—or really three-fold. It's learning as much as I possibly can from Doug for as long as I can. Spending time with the NMHC staff – I had an opportunity to do that just briefly last week, and it was really great and they're willing to help tutor me a little bit and help bring me up to speed. So I'm excited about that. But it’s also really important for me to spend time with the members where you are. There's nothing I enjoy more than walking a property and understanding how it operates, how it was financed, what the opportunities are, what the challenges are. So, I know, this is a membership organization. It's driven by what the members need and want, and I'm very excited to learn more about that so we can set a really solid course for the future.

Sharon: Thanks, Ken. I look forward to jumping in to work with you, the NMHC team and the membership. I also really appreciate the leadership of the executive committee through this process. It’s been great. 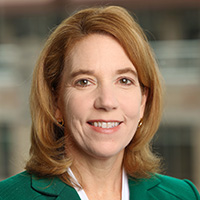 Although she does not start until October 11, you will have an opportunity to meet Sharon at the 2022 NMHC Fall Meeting September 12-14 in Washington, D.C.—as she will be joining us periodically throughout the week. Sharon will officially come on-board during the 2023 NMHC Annual Meeting.

What Sharon Brings to this Role

Sharon brings the ideal skillset and background to lead NMHC—and our industry—into this next chapter.

She combines an extensive knowledge of housing policy and law with a successful track record advocating on housing issues and first-hand experience developing and operating market-rate and affordable apartments. This unique collection of experiences set her apart from the other candidates.

What You Need to Know About Sharon

Sharon most recently served as Executive Vice President and Chief Operating Officer of Volunteers of America National Services (VOANS), the housing and healthcare affiliate of the Volunteers of America parent organization and one of the largest nonprofit affordable and mixed income/mixed-use housing operators in the nation.

VOANS operated 240 properties and nearly 13,000 units in over 40 states during her tenure.

Having run a 3,100-employee organization with gross consolidated revenues of $300 million annually, she not only has industry experience, but she has developed impeccable organizational experience.