On June 19, our country will celebrate Juneteenth, which commemorates emancipation of all those who were enslaved in the United States. It was on that date in 1865 when slaves in Galveston, Texas were finally freed from slavery, more than two years after the Emancipation Proclamation took effect on January 1, 1863.

NMHC is committed to racial justice and recognizes that to further this mission we must take concrete steps to promote racial equity and inclusion within the industry and our own organization. We will be honoring Juneteenth by closing our office to celebrate this day and encourage many of us to listen, reflect and learn. We invite you to engage with us on what your firm is doing to ensure racial equity and inclusion in your firms, and in the apartment communities that 40 million renters call home.

Statement by President Barack Obama on the Observance of Juneteenth on June 19, 2016

“Just outside the Oval Office hangs a painting depicting the night of December 31, 1862. In it, African-American men, women, and children crowd around a single pocket watch, waiting for the clock to strike midnight and the Emancipation Proclamation to take effect. As the slaves huddle anxiously in the dimly lit room, we can sense how even two more minutes seems like an eternity to wait for one’s freedom. But the slaves of Galveston, Texas, had to wait more than two years after Lincoln’s decree and two months after Appomattox to receive word that they were free at last.

Today we commemorate the anniversary of that delayed but welcome news. Decades of collective action would follow as equality and justice for African-Americans advanced slowly, frustratingly, gradually, on our nation’s journey toward a more perfect union. On this Juneteenth, we remember that struggle as we reflect on how far we’ve come as a country. The slaves of Galveston knew their freedom was only a first step, just as the bloodied foot soldiers who crossed the Edmund Pettus Bridge 100 years later knew they had to keep marching.

Juneteenth is a time to recommit ourselves to the work that remains undone. We remember that even in the darkest hours, there is cause to hope for tomorrow’s light. Today, no matter our race, religion, gender, or sexual orientation, we recommit ourselves to working to free modern-day slaves around the world and to honoring in our own time the efforts of those who fought so hard to steer our country truer to our highest ideals.” 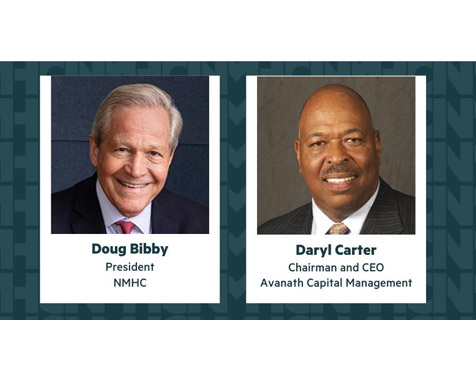 Communities in Crisis and a Call to Action Webinar

Discussion between former NMHC Chair and Chairman and CEO of Avanath Capital Management Daryl Carter and Doug Bibby on possible action steps for the leaders, employees and other stakeholders within our industry. I encourage all those looking for ways they can make a difference to listen to and consider Daryl’s experience, advice and counsel. The discussion can be found here >>>

NMHC has long been committed to diversity, inclusion and expanding opportunity in the industry. We will continue to act on this commitment going forward by identifying new ways to broaden access to the industry. More information on NMHC’s Diversity & Inclusion Initiative can be found here >>>.