As the COVID-19 crisis continues to develop, the NMHC research team is working on special analysis for our members. We are working diligently to complete this research quickly; in the meantime, we are happy to share some of regularly scheduled analysis.

According to the American Community Survey, more than half (51 percent) of all apartment households were rent burdened in 2018, meaning that they paid more than 30 percent of their monthly income on rent. But this aggregate statistic is a fairly crude metric of affordability. Apartment households in the U.S. are a diverse collection of students, working professionals, married couples and single parents, spanning all ages and incomes.

In this Research Notes, we take a closer look at these many disparate groups that comprise our nation’s apartment residents and examine how their rent-to-income ratios stack up against one another. This investigation underscores how responses to apartment affordability challenges need to be either targeted to address the specific needs of unique renter groups or flexible enough to address the full range of varying needs for all renter groups.

For this analysis, we divided apartment householders into six age categories (18-24, 25-34, 35-44, 45-54, 55-64 and 65+); three categories of educational attainment (currently enrolled in school, not enrolled and without a bachelor’s degree and not enrolled and with a bachelor’s degree); and, finally, five different household types (living alone, living with roommates, married with children, married without children and single parent). This gives us 90 unique segments of apartment households. 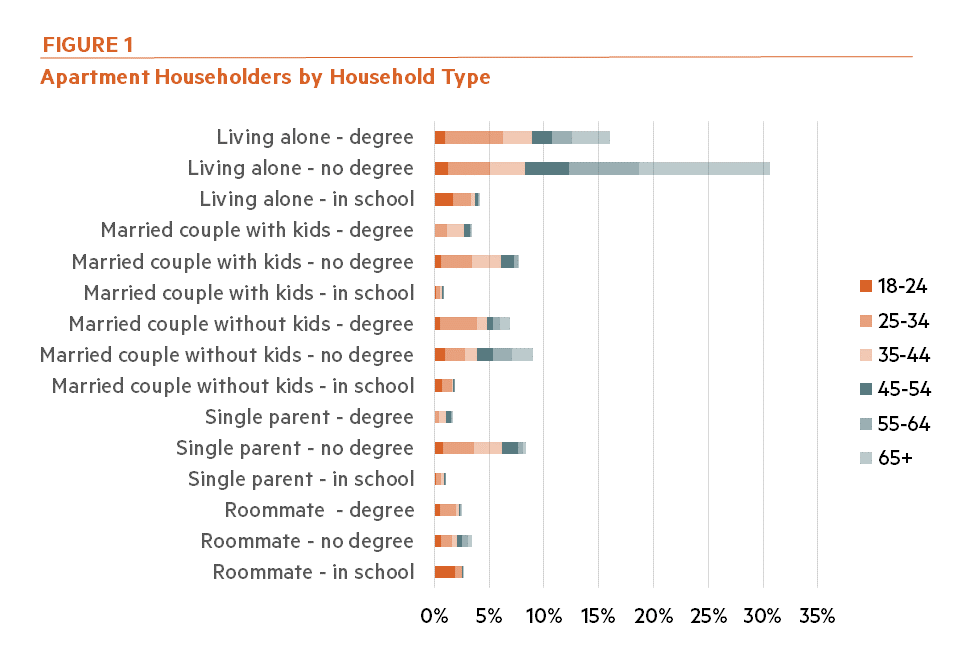 As shown in Figure 1, more than half (51 percent) of apartment households in 2018 were made up of apartment renters who lived alone, and the majority of those individuals (60 percent) did not hold a college degree.

The chart also illustrates that more than three in four apartment householders aged 55 and above lived alone. Why is this the case? Of apartment householders living alone who were aged 55 to 64, 60 percent were either divorced, widowed or separated in 2018. Of those aged 65 or older, 82 percent were divorced, widowed or separated.

This household type mix changes, however, when we move from the nation’s least expensive to most expensive apartments. The most noticeable shift relates to educational attainment.

In the nation’s least expensive apartment units (less than 10th percentile rents), 12 percent of householders held a college degree, whereas, in the most expensive units (90th percentile rent or above), more than half (53 percent) of householders completed at least their bachelor’s (see Figure 2). This is to be expected since apartment householders with a college degree earned, on average, higher household incomes than those without a degree ($85,598 compared to $39,424 in 2018). 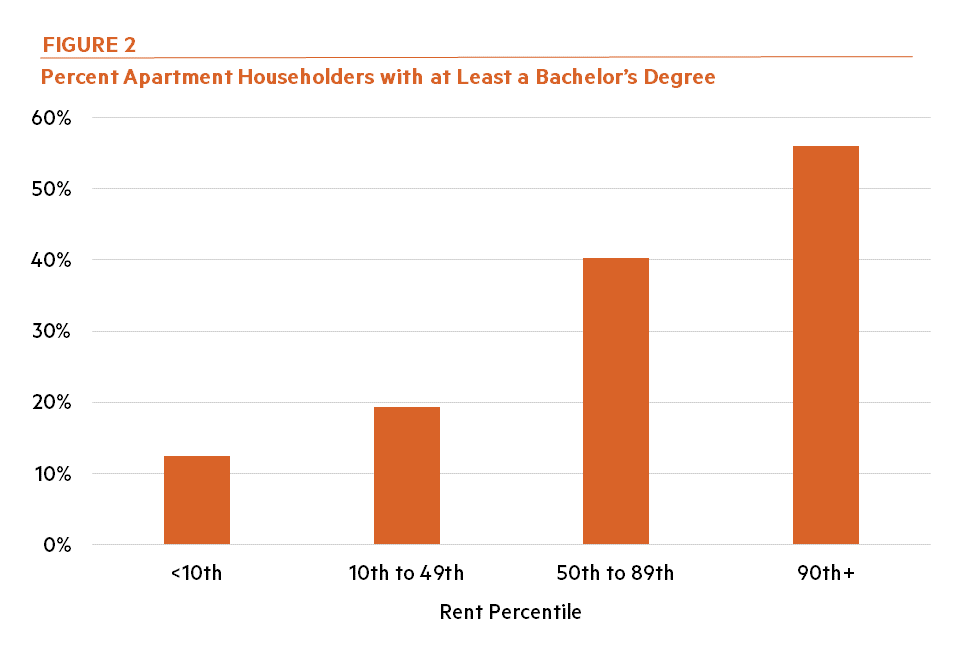 Given these two patterns, we might expect both roommate households and collegeeducated households to have lesser rent burdens than other household types, a hypothesis we put to the test.

What became immediately apparent after performing this exercise was that, of the apartment households with the highest rent burdens, the vast majority were those where the householder was currently enrolled in school (see Figure 3). 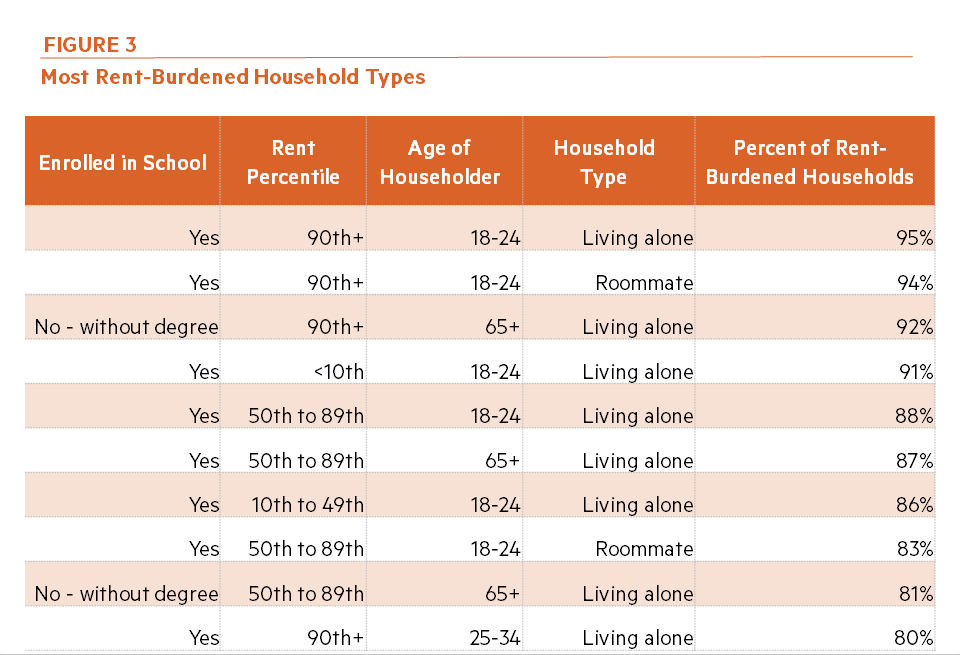 While many students face significant financial hardships and can have difficulty affording housing, most housing affordability attention is generally focused on the nonstudent population. Reflective of that focus, the following tables show the most and least rent-burdened apartment household types, excluding all student householders. 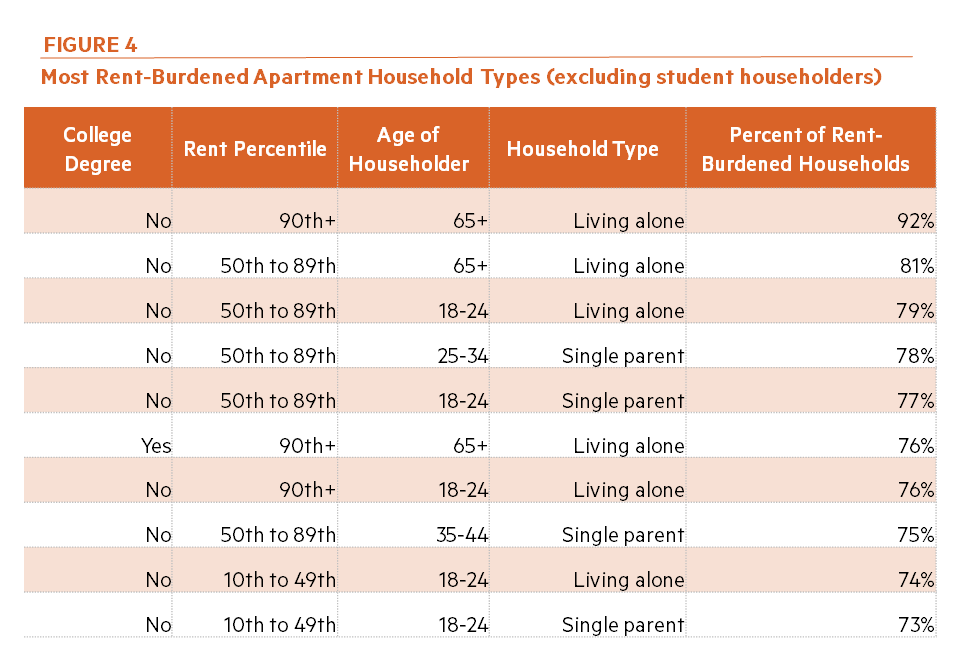 Of the top 10 most burdened apartment household types, only one included householders who held a bachelor’s degree. This likely reflects the trend of college graduates tending to earn more than their peers without a degree.

Another key takeaway from the table was that renters living alone and single parents tended to be the most burdened household types, especially among the nation’s youngest (18-24) and oldest (65+) age cohorts. Many older renters are presumably retired, and, therefore, likely to be living off of some combination of social security income, interest income and accumulated wealth (which is unobservable in the data).

The level of rent (on a national scale) appeared to be less of a factor in predicting burden levels, except that no household type within the lowest rent category (less than 10th percentile rent) made it onto the top 10 most burdened list. 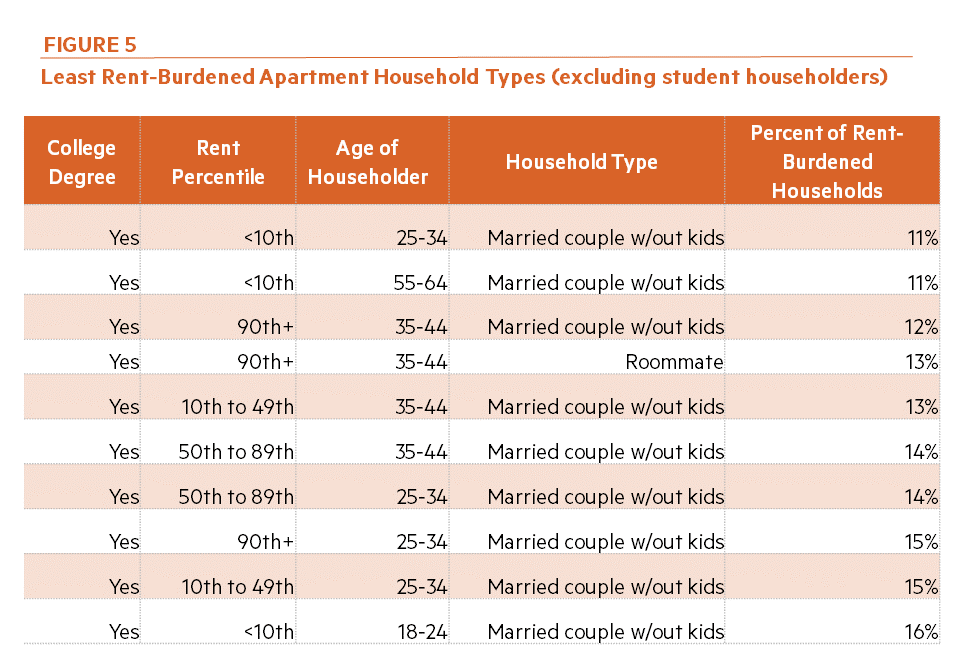 All of the top 10 least burdened apartment household types were led by a householder who held at least a bachelor’s degree, which is consistent with our prior hypothesis.

Married couples without kids clearly seemed to be the least burdened apartment household type overall, and, to a somewhat lesser extent, roommate households as well. Even if we were to extend this list out to the top 20 least burdened household types, only married couples without kids and roommate households would be present. It stands to reason that households with two or more earners and no dependents are likely to be best equipped to manage their housing costs.

We also saw much less representation in this table from the youngest and oldest age cohorts. There were no 65+ household types in the top 10, which again may reflect challenges related to measuring the financial wellbeing of retirees.

There is no such thing as a “typical” apartment household. Apartment residents span all ages, incomes and household types, and some of these groups are more vulnerable than others to high housing costs.

We found that renters without a bachelor’s degree, for example, along with those who were the sole earner for their household, tended to face greater affordability challenges when compared to other household types. The nation’s oldest and youngest renters faced some of the highest rates of rent burdens, as well. At the other end of the spectrum, married couples without kids and roommate households tended to spend less of their income on rent, especially among householders who had earned a bachelor’s degree.

Aggregate affordability statistics can be misleading, not just because of this diversity among apartment households, but also because of their inclusion of residents who are enrolled in school (and are less likely to have a full-time job) and retirees, for which there is very little publicly available data. Future efforts aimed at addressing issues surrounding apartment affordability should take care to consider the unique challenges faced by the full range of renter groups.

Questions or comments on Research Notes should be directed to Chris Bruen, Senior Director of Research, NMHC, at cbruen@nmhc.org.

Download the full PDF of the March 2020 Research Notes