How U.S. Rent Growth in 2021 Really Stacks Up in the Longer-Term

Yet, these figures measure rent growth relative to what was an uncharacteristically weak apartment market during 2020 due to the outbreak of COVID-19. In 3Q 2020, national rents were, depending on the source, either relatively flat (up 0.3 percent from the prior year, according to CoStar) or slightly down (-1.4 percent, according to RealPage).

In this Research Notes, we examine whether this year’s elevated rent growth represents an increase in the longer-term trajectory of rents or, alternatively, if we are simply witnessing rents recover from what was a below-trend 2020. In addition, we look at where rents are today relative to where they would have likely been if the pandemic had never taken place.

Our conclusion is that much of the strong rent growth grabbing headlines of late is mostly attributable to strong rent recovery from an uncharacteristically weak 2020. But even as the market in aggregate continues to recover, the rebound is uneven; while some are outperforming the national trend, other sub-markets and unit types are marking rent growth well below their pre-pandemic trend.

Current Rents Were Just Marginally Above Their Longer-Term Trend

During the four-year period from 3Q 2015 to 3Q 2019, effective asking rents among professionally managed apartments tracked by RealPage grew at an average rate of around 3.1 percent per year. Figure 1 below illustrates what it would have looked like if apartment rents had continued to grow at this rate throughout 2020 and 2021 compared to the actual trajectory of rents that we observed. 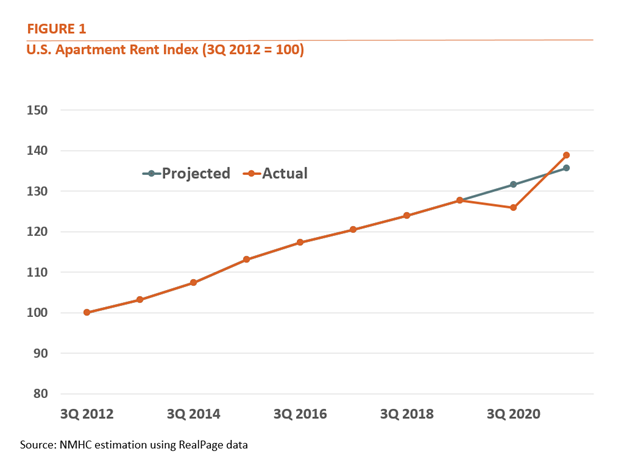 As we can see from the chart in Figure 1, rents have more than recovered from their dip during 2020. As of 3Q 2021, actual rent levels were 2.4 percent higher than they would have been if pre-pandemic rent growth rates had persisted during the last two years.

Yet, we can also see that this uptick in rent growth is not as historic as this year’s year-over-year figures suggest. Over the past two years, RealPage same-store apartment rents rose 4.3 percent per year on average, up from the 3.1 percent growth averaged from late 2015 through 2019; however, this was still well below the more than 5.0 percent year-over-year growth recorded in 2015 and the 7.5 percent record-high growth recorded back in 3Q 2000.

Within these markets, smaller units in particular—for instance, studio apartments and one-bedrooms—continued to offer rents well below pre-pandemic trends in 3Q 2021, as renter preferences shifted toward larger units. 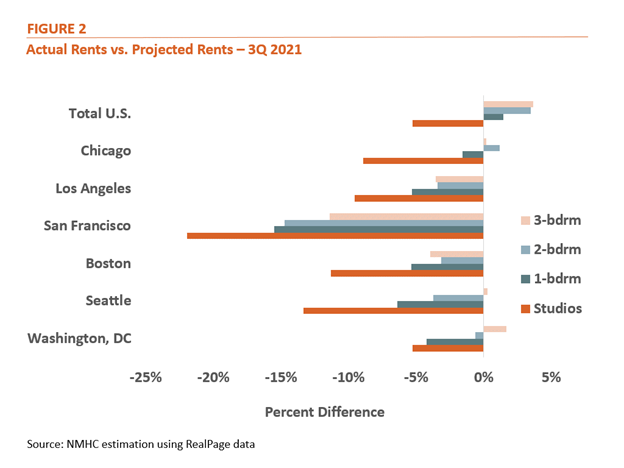 As is illustrated in Figure 2 above, studio apartments were the only unit type nationally that had still not recovered to their pre-pandemic trend level as of 3Q 2021. Furthermore, within more urban, expensive markets (most of which are on the coast), studio apartment rents were much further below trend than their one-bedroom, two-bedroom and three-bedroom counterparts.

According to CoStar data, the average national asking multifamily rent sits $88 a month higher today than if rent growth had continued at pre-pandemic rates. We also continued to observe a wide variation in performance across metro areas.

At the one extreme, Florida markets tended to record the highest deltas between actual and projected rents, led by Palm Beach, Fla., where rents were $380 higher than projected, Tampa ($264 higher than projected) and Fort Lauderdale (+$264). In fact, Orange County, Calif., which also rode the wave of rent acceleration over the past year, was the only non-Florida market to make the top five list of over-performing markets. 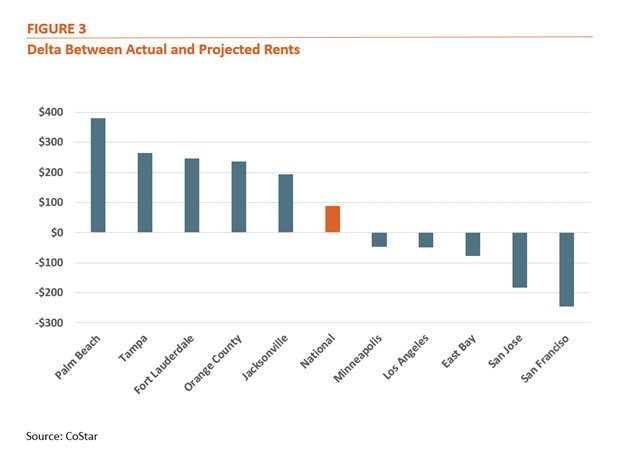 The overall change in rent by market, however, obscures what were frequently much different story lines across asset classes. To underscore some of these differences, CoStar set up a national rating for multifamily buildings based on a five-star scale. The luxury end of the market represents four- and five-star buildings, while buildings with lower levels of amenities and overall quality of interior/exterior design fall into the three-star or one- and two-star categories.

Using this measure, four- and five-star assets experienced more extreme swings in rent levels . Palm Beach led the positive growth category with $509 per month more than was projected using pre-pandemic growth rates, with Orange County only slightly behind at $446 more than projected. At the other end of the spectrum, however, San Francisco’s most expensive units were $293 cheaper per month relative to trend. 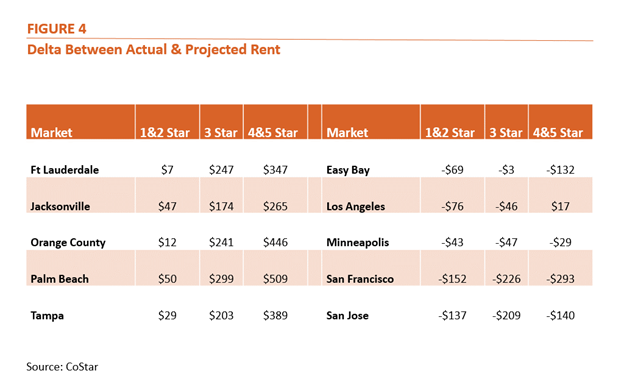 The jumps in rents for three-star properties lagged the most expensive units but still had a meaningful effect on overall market rent growth. Again, Palm Beach led the field with 3 Star rents registering $299 more currently than we projected using pre-pandemic growth rates. Just to the south, Fort Lauderdale’s 3 Star asset rents skyrocketed upward over the past year, reaching $247 over trend.

And while Tampa’s mid-priced units were up $203 per month, that translates into an extra $2,436 per year in rent for those renter households. If the average three-star Tampa renter household spent 25 percent of their yearly income on rent in 2020, the 2021 increase would consume almost all of the income gain assuming a 4.8 percent increase in wages this year as household income would rise by $2,700.

San Francisco and San Jose renter households in three-star properties nonetheless have reaped significant monthly savings over the past year with asking rents down $226 and $209, respectively, relative to pre-pandemic trends. This translates into a yearly savings on rent of $2,712 in San Francisco and $2,508 in the South Bay area.

Going into the pandemic, the lowest-priced properties had the tightest vacancy rate at 5.2 percent, and, over the past two years, this vacancy declined to 3.9 percent. Yet, rents in this lower tier have not seen the same outsized gains as in the higher priced properties.

U.S. apartments posted record-high rent growth in the latter part of 2021 compared to the previous year, according to data from both RealPage and CoStar. Yet, we can attribute much of this growth to the recovery from an uncharacteristically weak 2020. And, in fact, if apartment rents had continued to increase throughout 2020 and 2021 at the same rate averaged in the preceding four years (2016-2019), they would have reached levels only slightly below where rents are currently.

Our analysis further demonstrated that, while the U.S. apartment market in aggregate has more than recovered from any pandemic-induced weakness, there were still many sub-markets and unit types with rents well below their pre-pandemic trend—namely, smaller apartments units (i.e., studios and one-bedrooms) and those located in more urban, expensive and largely coastal metro areas.

The degree to which current rent levels exceed those projected by pre-pandemic growth rates also varied significantly across price points. Within markets with outsized overall rent growth relative to trend, such as Tampa and other Sunbelt markets, we found the largest rent premiums among the most expensive units—those within CoStar designated three- or four- and five-star properties. While one- and two-star properties did see price gains, the increases were not onerous and appear to have been within the means of the resident base to afford.

Questions or comments on Research Notes should be directed to Chris Bruen, Senior Director of Research, NMHC, at cbruen@nmhc.org or Jay Lybik, National Director of Multifamily Analytics, CoStar Group, at jlybik@costar.com.