Owners, developers and managers of purpose-built, off-campus student housing frequently claim that their product is a safe, recession-proof investment. After all, total fall enrollment in degree-granting postsecondary institutions grew 4.7 percent from 2007 to 2008 and 6.3 percent from 2008 to 2009. If anything, the Great Recession, which spanned from December 2007 to June 2009, appeared to have a positive effect on college enrollment. And while enrollment is not the sole driver of purpose-built student housing performance – economic downturns may also affect students’ ability to afford certain types of housing, for instance – it is a critical driver of demand.

The conventional wisdom behind this “recession-proof” thesis is that there is a lower opportunity cost of enrolling in school during a weak job market. If well-paying work is hard to find during a recession, why not spend that time investing in yourself by earning a degree? This is a particularly relevant question for the student housing sector given that we’ve been in a recession for the past year.

In this Research Notes, we will dig deeper into this relationship between economic growth and college enrollment to uncover if student housing is, in fact, recession-proof or even counter-cyclical (performing better during economic downturns).

To isolate the effect of recessions on college enrollment, we must first account for the overall growth of the college-aged population. That is, we want to separate the impact of long-run changes in the student population from possible short-run cyclical effects. Although not every member of this population enrolled in college, these data importantly illustrate changing demographic trends. For instance, while enrollment did increase during and immediately following the 2008 recession, it was trending upward as the large millennial generation (born 1980-1996) entered their college years. Figure 1 below illustrates the strong, positive correlation (0.50) between the growth of the college-aged population and enrollment growth from 1976 to 2019. 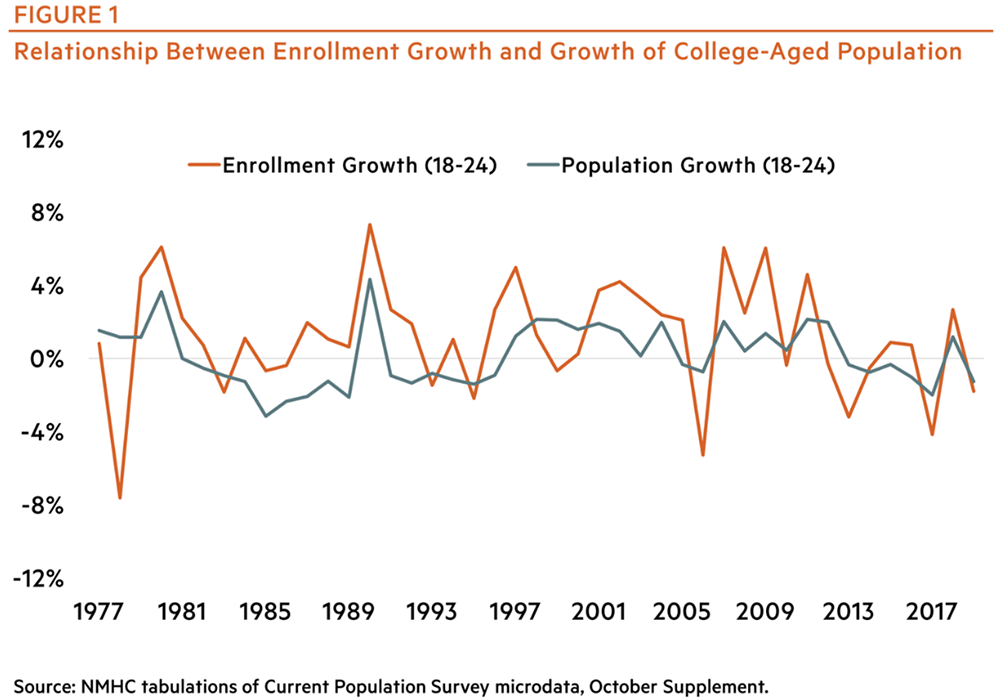 Enrollment rates, on the other hand, allow us to observe changes in enrollment that are not directly related to the size of the college-aged population. For instance, the college enrollment rate for 18-24-year-olds has been increasing over time – from 26.8 percent in 1976 to 41.4 percent in 2019. Yet, we can see from Figure 2 below that this rate of growth has slowed over the years and may have even plateaued after 2011. 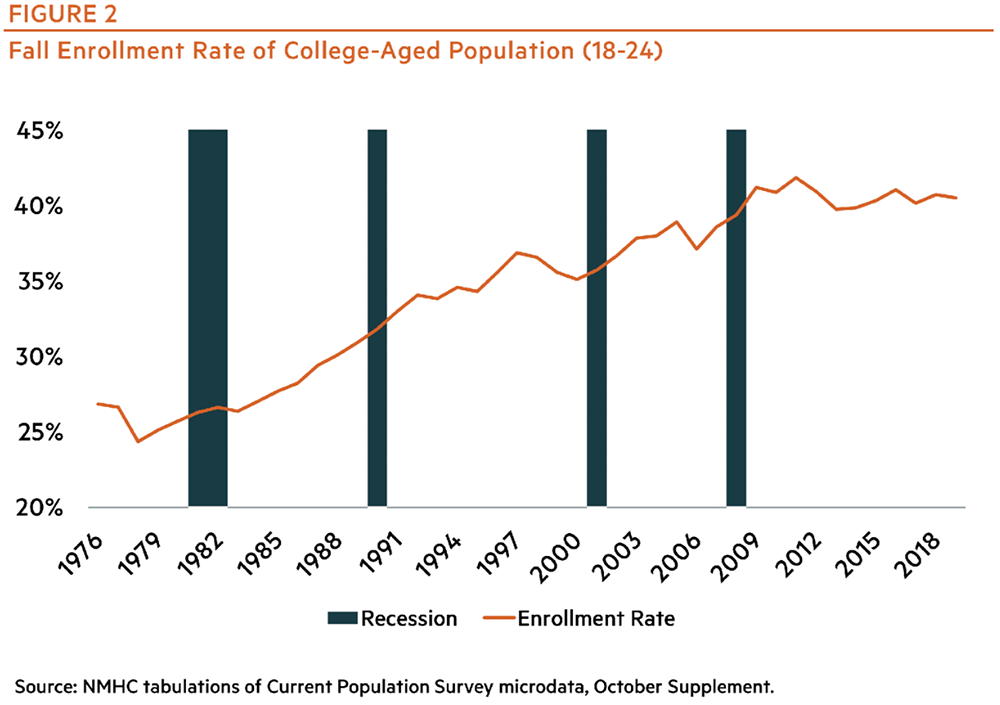 If college enrollment is in fact affected by recessions, we would expect enrollment rate growth to deviate from its trend in a noticeable way during or soon after recessionary years (years where the U.S. economy was in recession in October are indicated by gray, vertical bars in the chart). However, this was not the case.

Still, when we look only at aggregate enrollment rates, we risk obscuring the behaviors of different subpopulations. In figure 3 below, we chart the long-term trends of college-aged (18-24) enrollment rates for white males, white females, Blacks (both sexes) and Hispanics (both sexes). (We didn’t break out the Black and Hispanic data by sex due to their smaller sample size). 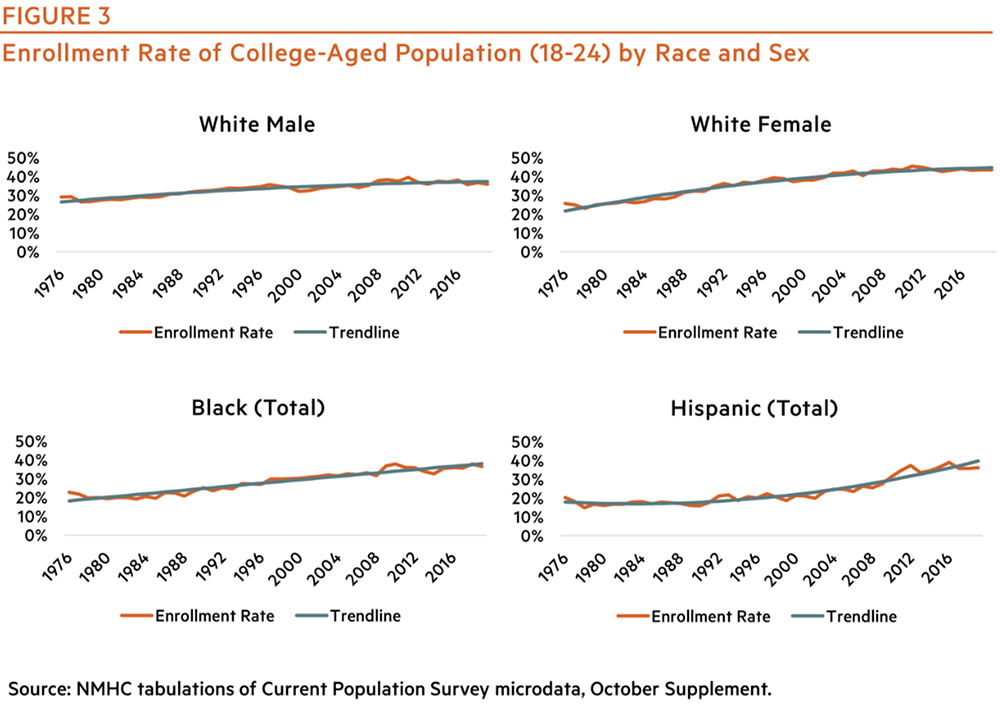 Particularly striking is how stable enrollment rate growth has been among the male and female white, 18-24-year-old populations, showing almost no deviation from their long-term trends. This is consistent with enrollment growth being unaffected by recessions.

On the other hand, both the Black and Hispanic populations saw trend disruption following the Great Recession. The enrollment rate of the college-aged Black population did appear to temporarily jump above its longer-term trend in 2009, 2010 and 2011, as did the enrollment rate of college-aged Hispanics in 2011 and 2012. While the recession itself was over by the fall of 2009, it is important to note that the unemployment rate of the 16-24-year-old cohort did not peak until April of 2010 at 19.5 percent (unemployment tends to be a lagging indicator). With that being said, the unemployment rate among 16-24-year-olds reached similar heights (19.0 percent) in late 1982, and yet we observe no corresponding spike in college enrollment among young Blacks or Hispanics during this period.

In examining the potential influence of recessions on college enrollment, this 18-24-year-old cohort – which constitutes the typical “college-aged” population – may not be the most relevant group. The vast majority of Americans who decide to enroll in university after high school are presumably not making this decision or timing their enrollment based upon the current labor market. Most students simply go straight from high school to college. On the contrary, it is more likely that older adults would decide to return to school for a second degree during recessions or periods of higher unemployment. Thus, we will now turn our attention to the 25-34-year-old U.S. population. Figure 4 charts their college enrollment rate from 1976 to 2019. 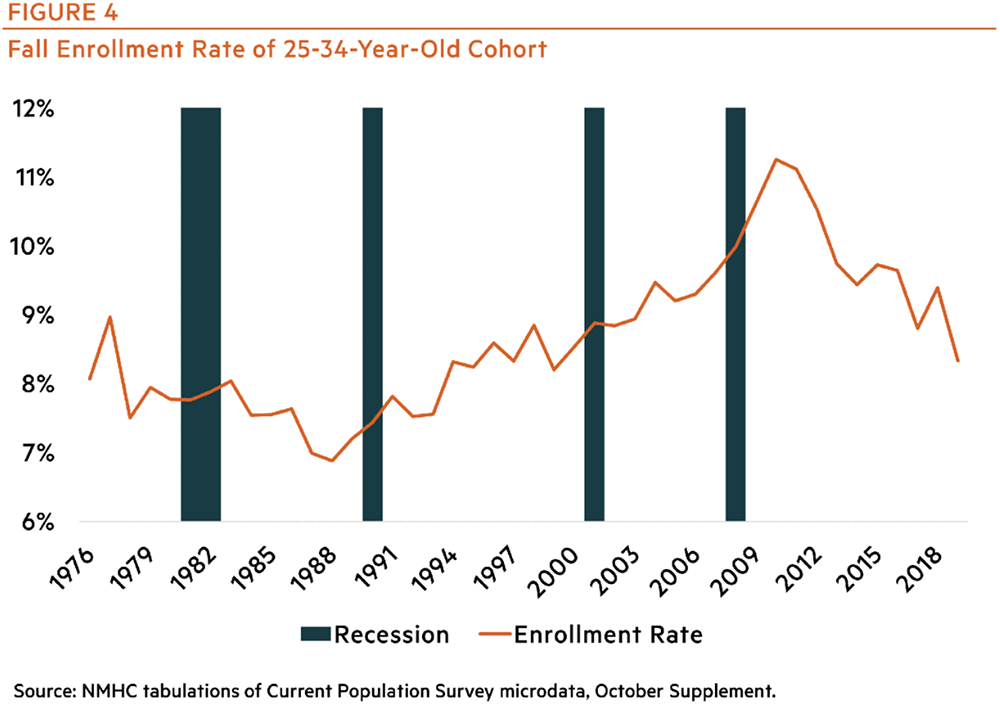 We can see that this older group exhibits much different behavior than its younger counterpart. For one, its enrollment rates are much lower, ranging from 6.9 percent in 1988 to 11.2 percent in 2010. The enrollment rate trend is also much more variable for this age group, tending to decrease between 1976 and 1988, increase from 1988 to 2010, and then decrease from 2010 onward. None of these inflection points appear to correspond to a recession.

Once again, when we break this age cohort into separate subgroups based on race and sex, we observe slightly different enrollment rate trajectories (Figure 5). 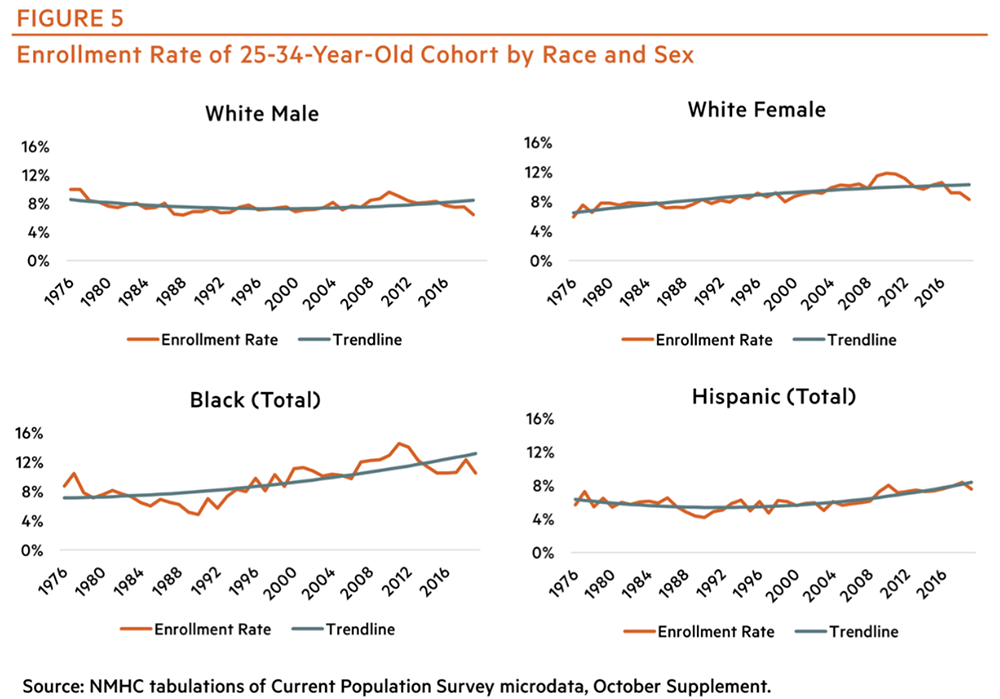 One commonality, however, is that the enrollment rate for all groups appear to have spiked above trend in the years following the Great Recession. Yet, similar to our analysis of the 18-24 group, we do not observe this response following prior recessions.

The Unique Severity of the Great Recession

So why might we expect an increase in college enrollments after the Great Recession of 2008 when we observed no such response in prior recessions? For one, not all recessions are created equal. As illustrated in Figure 6 below, the Great Recession was much more severe than the other recessions that took place during this 43-year period. From the fourth quarter of 2007 to the second of 2009, Real GDP in the U.S. declined by nearly 4 percent. 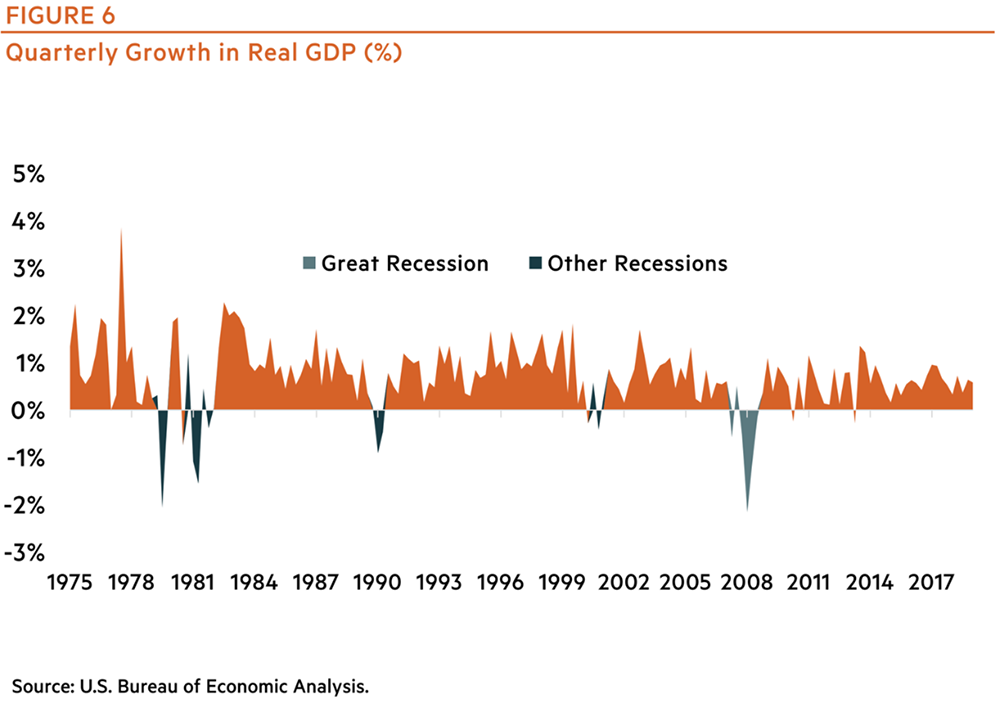 Yet, we noted earlier that unemployment rates in the early ‘80s reached levels similar to those seen after the Great Recession. If we think that higher unemployment is causing people to go back to school, then we would expect to have seen above-trend enrollment rate growth in both time periods. As a result, we cannot say with certainty that the Great Recession had a positive effect on enrollment growth, or if the spike in enrollments during this period was merely due to unrelated factors.

At the very least, college enrollment does not appear to be negatively affected by recessions, which supports the notion that the student housing industry is in fact recession-proof. However, we’ve also shown that every recession is unique, and that the Great Recession, for instance, may have actually had a positive effect on enrollment due to its sheer magnitude. In this same way, it is difficult to predict how the latest COVID-19 recession will affect enrollment in the years to come given it is not just an economic downturn, but a global health crisis as well. Still, if the past provides any insight on things to come, it is likely that pre-pandemic trends will resume after the recent recession.

Questions or comments on Research Notes should be directed to Chris Bruen, NMHC's Senior Director of Research, at cbruen@nmhc.org or 202/974-2331.

Download the full PDF of the March 2021 Research Notes