In this Research Notes, we will examine which apartment households are most likely to live car-free and how much money this might be saving them.

Apartment households located in denser parts of the country—which we measure by the number of households per square mile—tended to own much fewer cars. 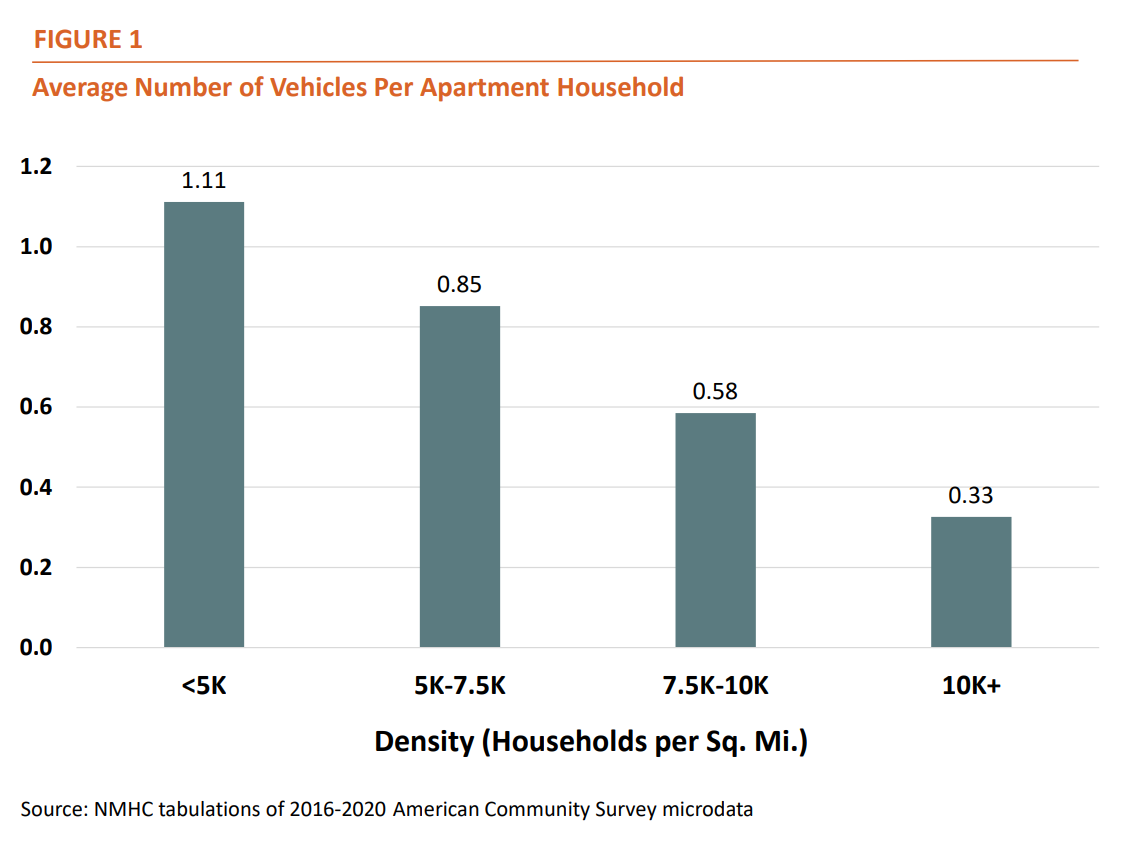 It is no surprise, then, that the top twenty-five neighborhoods with the lowest number of vehicles per apartment household were all located in New York City, and all but one had densities greater than 10,000 households per square mile. (There are only a handful of neighborhoods outside of New York City—in San Francisco, Los Angeles, Chicago and Hoboken, NJ—with comparable levels of density.) 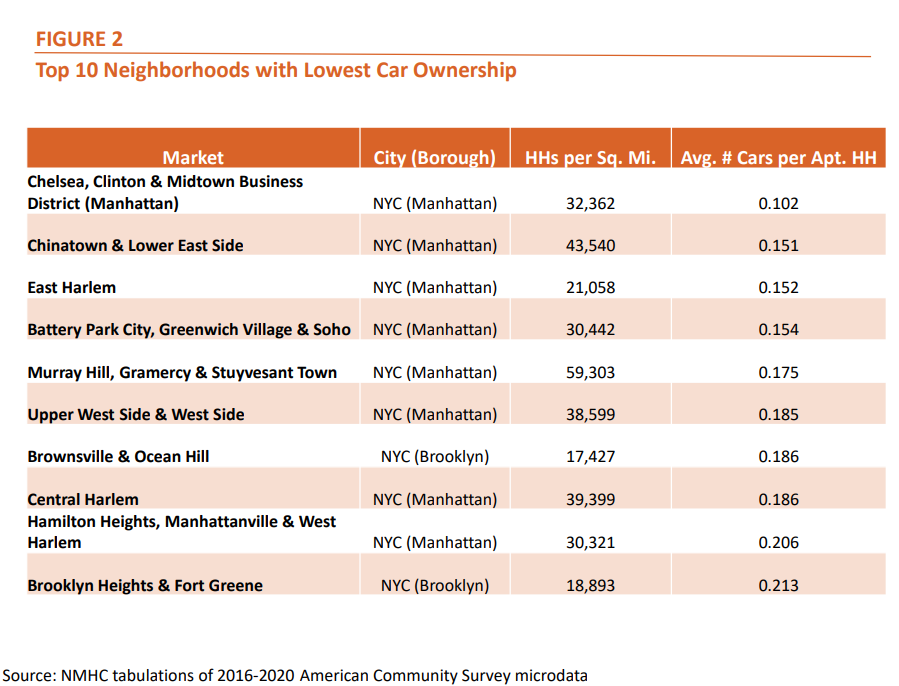 Yet, it is not necessarily the density itself which is causing such low levels of car ownership in many New York City neighborhoods, but also the fact that New York has the most extensive bus and rail network in the country. Sixty-one percent of working NYC apartment residents commuted to work via public transport (bus, subway, or commuter rail). Jersey City, NJ, which is also part of the larger NYC rail network, is the city with the second-highest share of apartment residents who commute via public transit (55%). Other U.S. cities with relatively high levels of public transit usage include Washington, DC, where 39% of working apartment residents commuted by public transit; Chicago (38%); Yonkers, NY (35%); San Francisco (34%); Boston (34%); and Cambridge, MA (34%).

Furthermore, we can see from Figure 3 below that there is a positive relationship between public transit usage and car-free living. 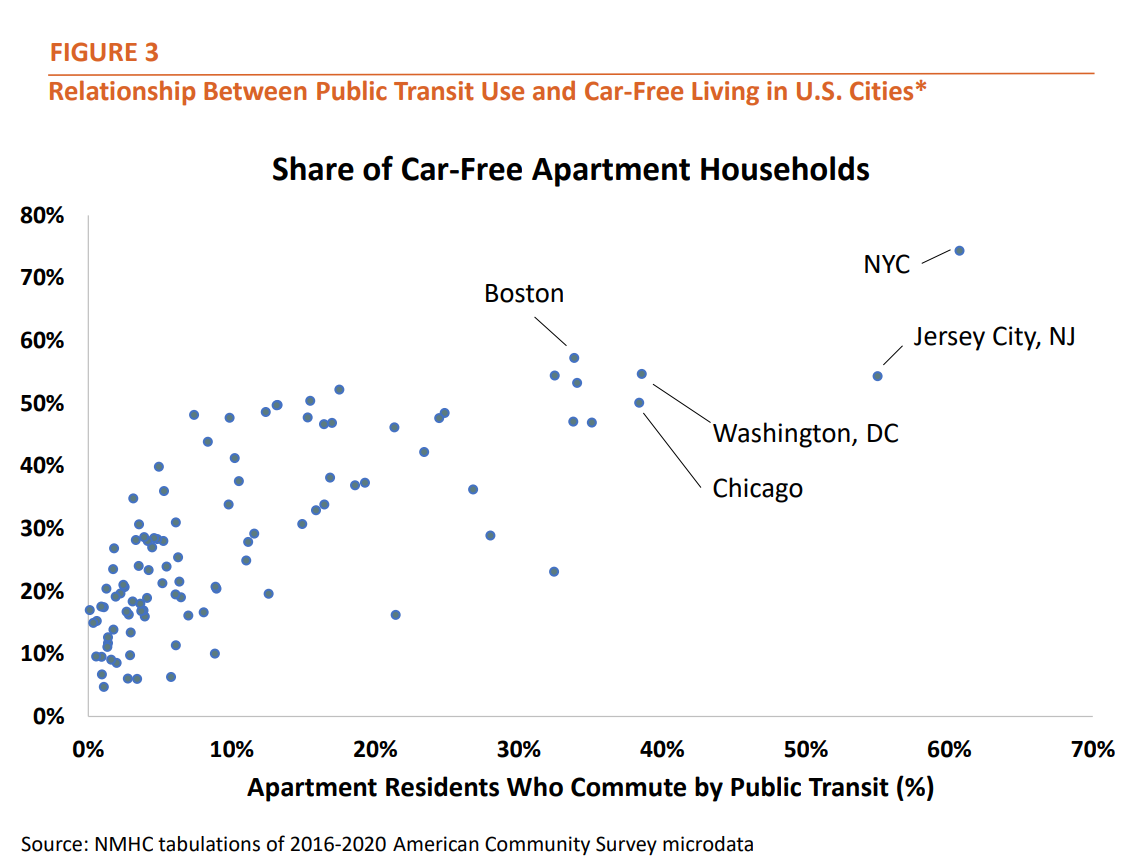 Car ownership depends not just on the relative cost and availability of alternatives—such as walking, biking or taking public transit—but also on a household’s disposable income. Figure 4 below illustrates how apartment households with higher levels of disposable income (after paying rent) tend to own a greater number of vehicles, on average. This relationship exists not only in dense cities, such as New York City, but throughout the entire U.S. as well. 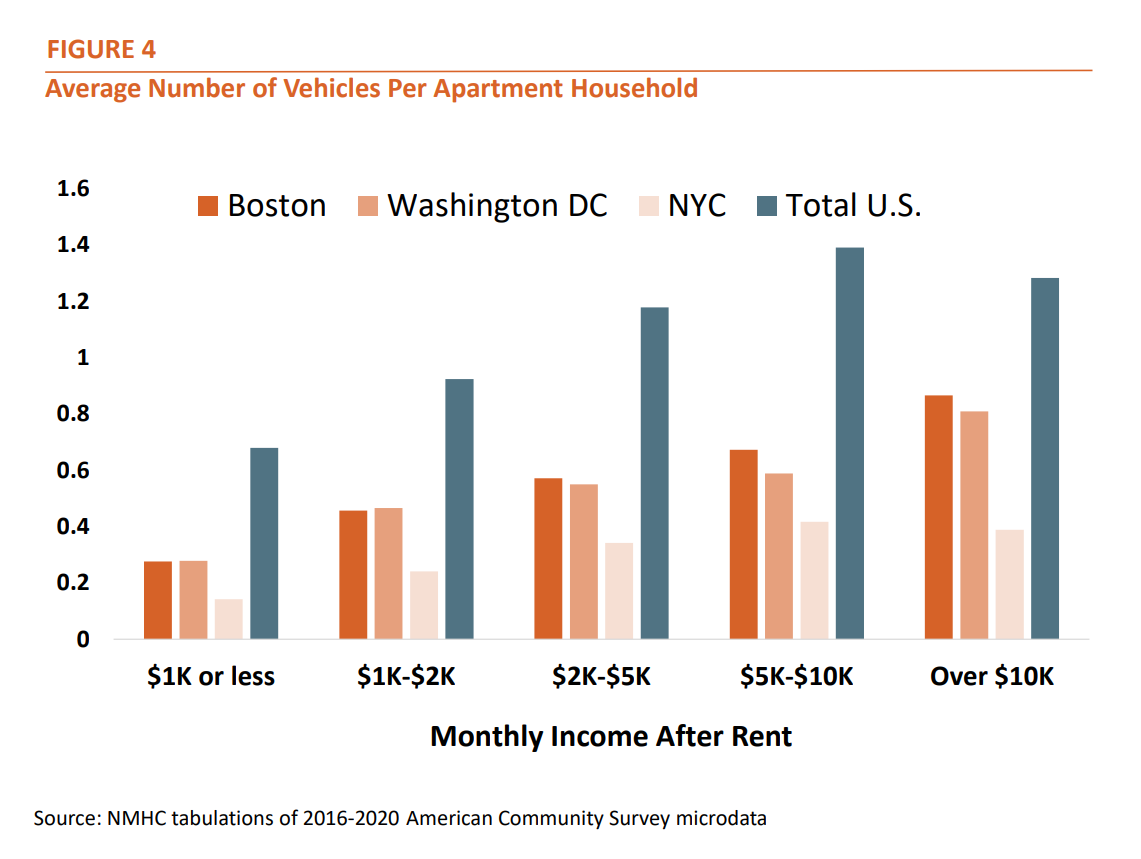 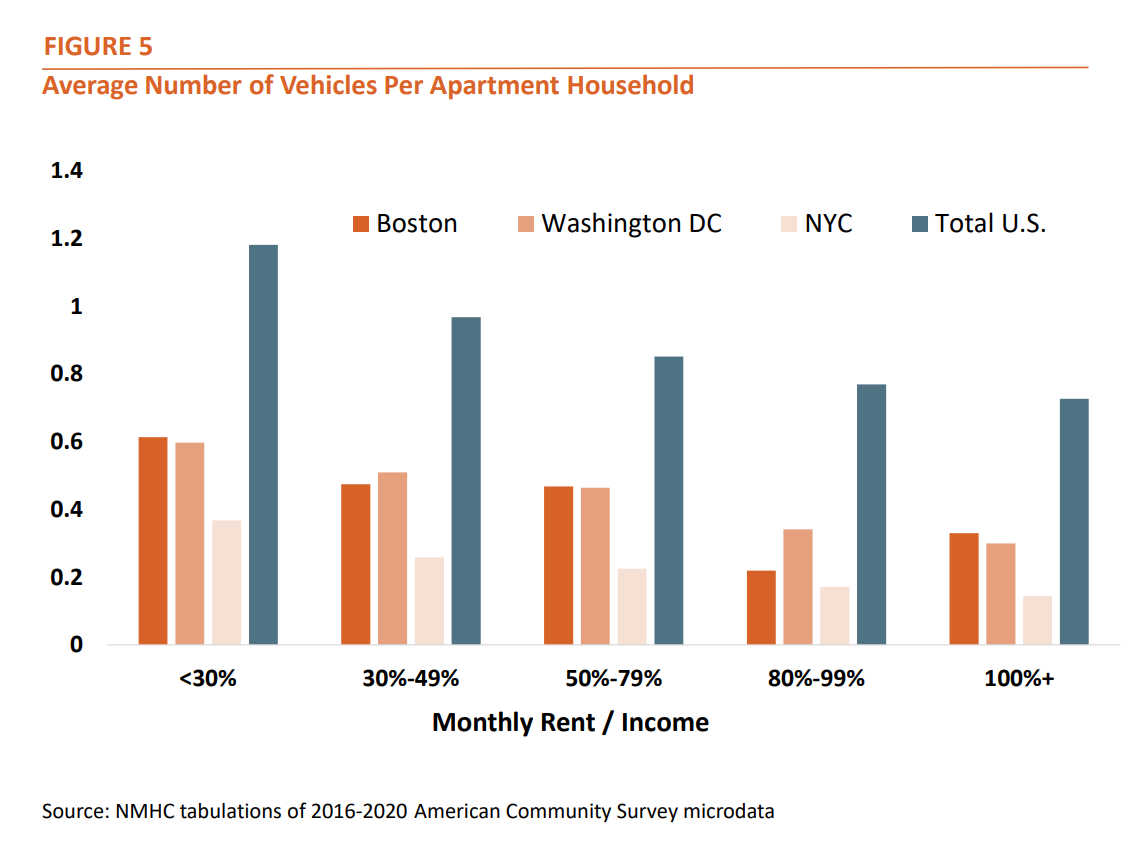 To estimate just how much apartment households were saving by going car-free, we turned to data from the Consumer Expenditure Survey (CES), which queries respondents both on their cost of housing and transportation costs.

We found that, from 2019 to 2020, the median family who reported having no vehicles at their home spent just 6.4% of their monthly income on transportation-related costs, a lower share than families who owned one vehicle (12.1%) and those who owned two or more (12.5%). 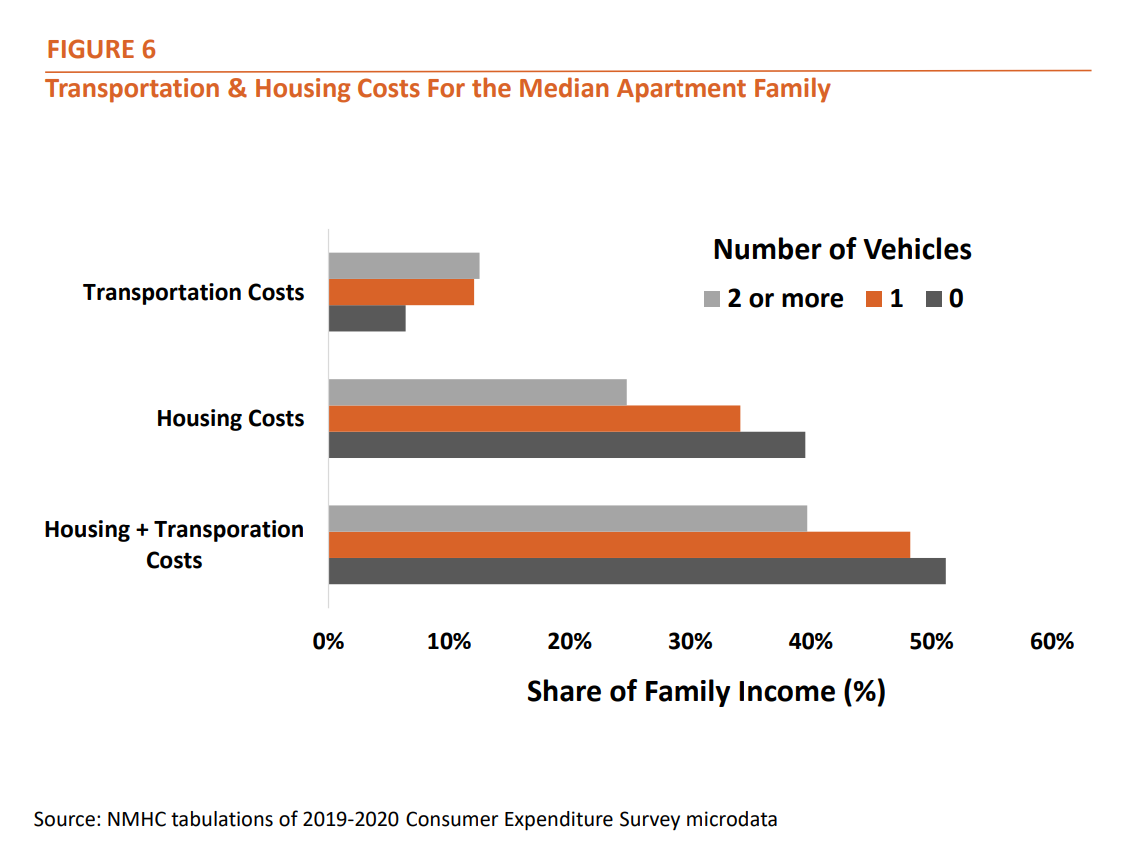 Still, because respondents with fewer vehicles tended to spend a higher share of their income on housing costs, these families reported the highest share of combined costs (housing + transportation) as well. This is in line with our previous finding that apartment households with lower incomes and/or higher rents tend to own fewer cars. Put another way, apartment households who spend a higher share of their income on rent can offset this burden somewhat by spending less money on car ownership, especially when they live in areas of the country that are walkable and have access to public transportation.

If we control for income, however, we can see that families with fewer vehicles tend to spend a lower share of their monthly income on their combined housing and transportation expenses.

Our analysis highlights the importance of measuring both the cost of housing and transportation in assessing a household’s financial well-being. Apartment households with higher rent-to-income ratios tend to own fewer cars on average, saving them money on transportation costs.

Bottom Line: Encouraging development in dense, walkable neighborhoods with access to public transportation not only puts downward pressure on rents in these areas, but also allows residents the option to live car-free and save on vehicle-related expenses.

Questions or comments on Research Notes should be directed to Chris Bruen, Sr. Director of Research, NMHC, at cbruen@nmhc.org.