The U.S. doesn’t have enough housing. Freddie Mac estimated that we were short 3.8 million units at the end of 2020, while a recent NMHC and NAA study found a shortfall of approximately 600,000 apartment units in 2021. Yet, many NIMBYs argue that additional development is unnecessary when the U.S. already has so many vacant homes sitting idle. There were, after all, 14.6 million vacant housing units in 2021, according to American Community Survey microdata.

This edition of Research Notes explains why the NIMBYism belief is misguided:

Vacant Units for Sale or for Rent Are Only Vacant Temporarily

Nearly a third (30.0%) of vacant units in the U.S. were only vacant temporarily in 2021, according to American Community Survey data, as households moved and searched for new homes. More specifically:

Some Vacant Units Need to Be Renovated or Repaired

Those homes for rent or for sale that were vacant for more than a year in 2021 tended to be in older buildings and were less likely to offer necessary features such as kitchen facilities or hot and cold running water. This highlights the importance of maintaining and renovating our nation’s aging housing stock. 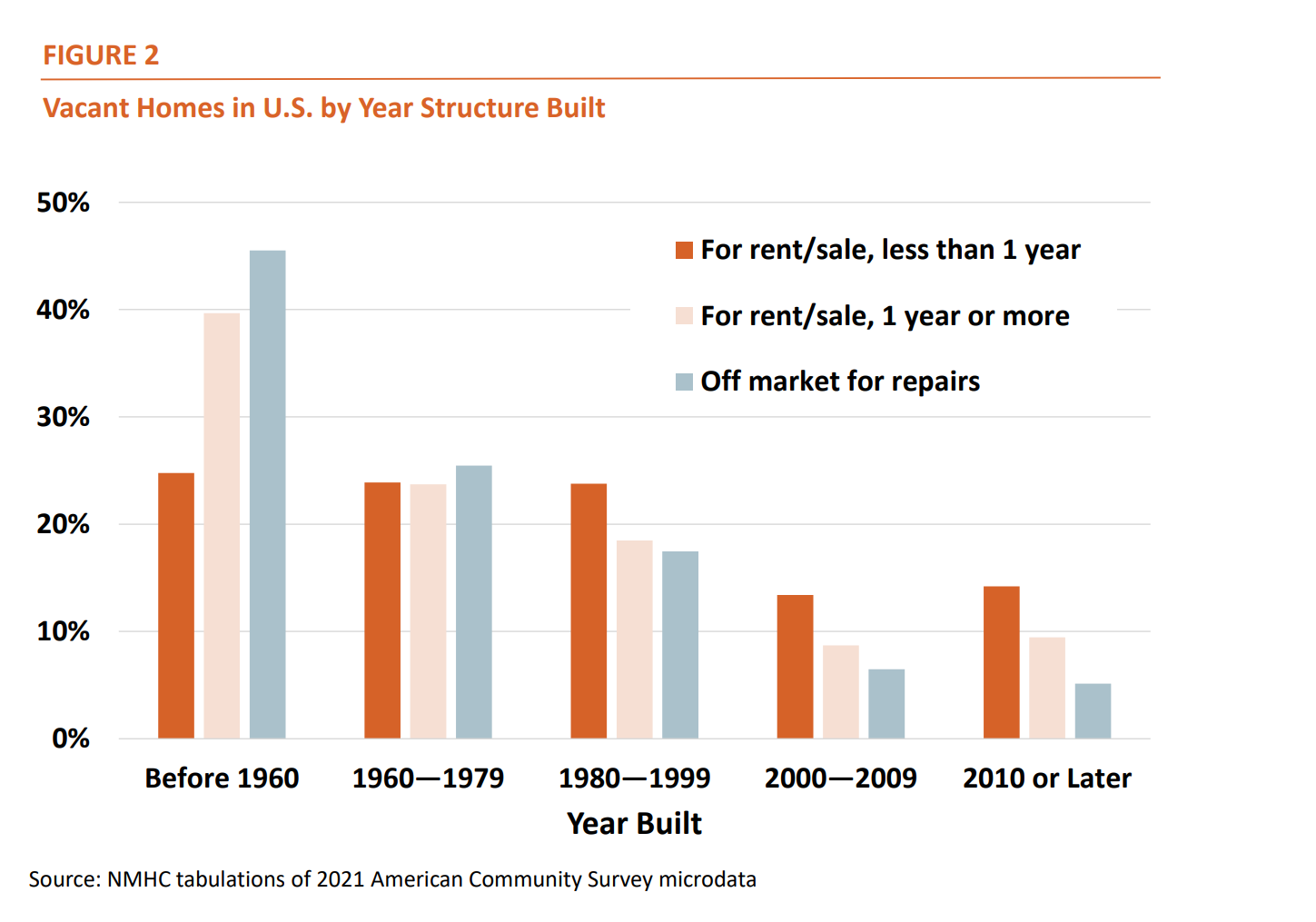 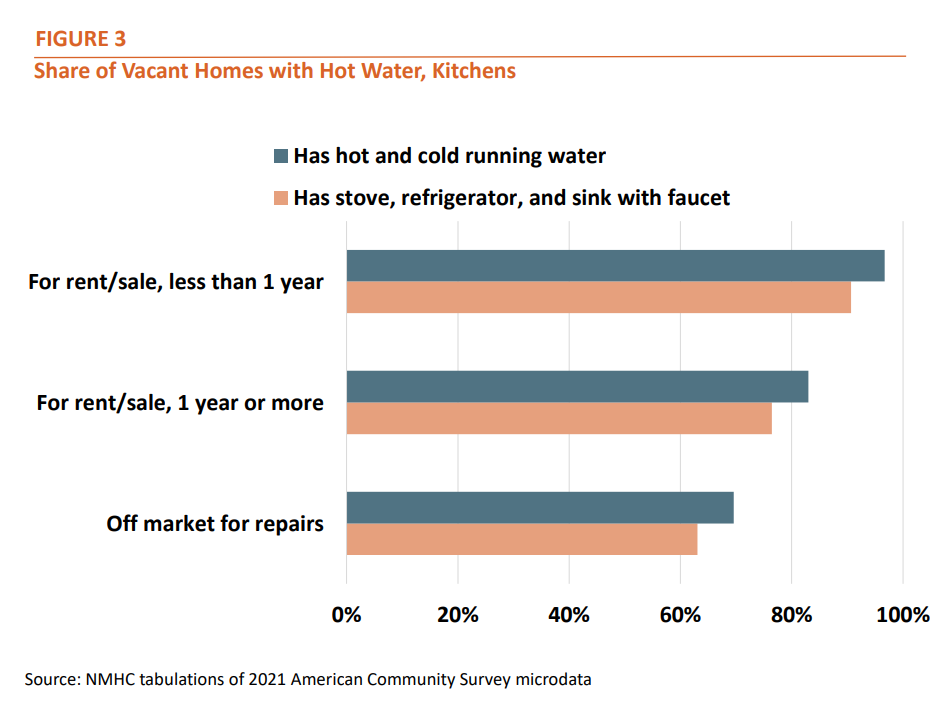 Meanwhile, more than 1.6 million vacant units in 2021 (or 11.0% of all vacant units) were held off the market entirely because they either needed repairs (5.3%) or were being repaired or renovated (5.7%) at the time they were surveyed.

These units being repaired—even more so than longer-term vacant units for sale or for rent—were much more likely to be in older buildings and less likely to have full kitchens or hot and cold running water.

The previous two sections should illustrate the importance of having some amount of vacancy in the housing market:

In order to buy or rent a new home, there must be some number of vacant homes available. If there are too few homes on the market, you may have to settle for a home that isn’t quite the right fit, pay a higher price to outbid other potential buyers/renters, or simply choose not to move. Without vacant homes, households would only be able to move if they agreed to switch homes simultaneously, which clearly is not practical.

Moreover, we wouldn’t want people to have to occupy homes that are in dire need of repairs or renovations.

And, while 14.6 million vacant units may seem like a lot, this is near the lowest rate of vacancies we’ve seen in decades. 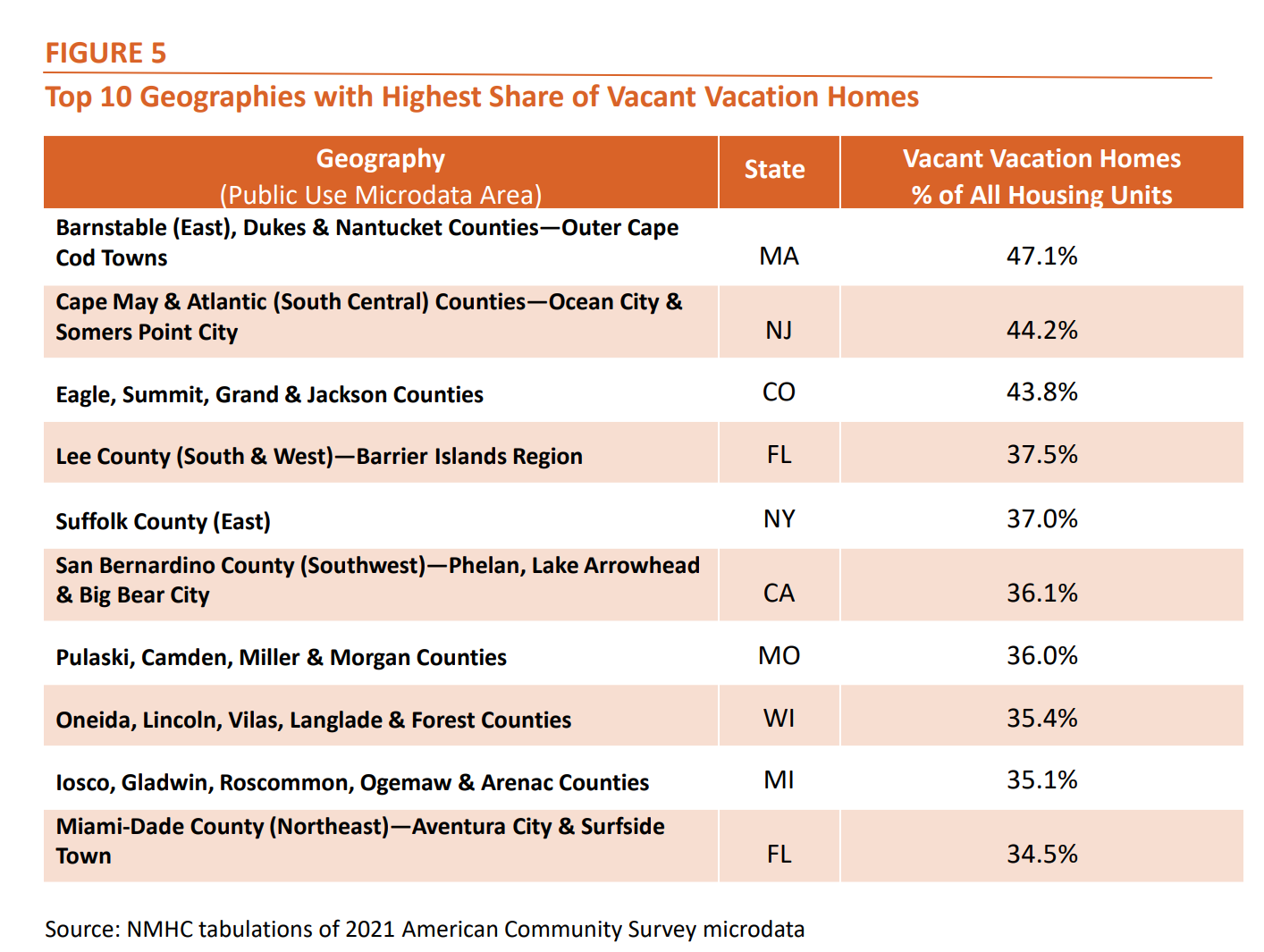 For reference, vacation homes made up a relatively small share of housing units in major cities such as:

One city that did stand out, however, was Miami, where vacation/seasonal vacancies accounted for 6.0% of all housing units and 11.4% of all multifamily (5+) units in 2021.

In other words, vacant vacation/seasonal homes generally aren’t very abundant in areas where most people live and work. Yet, they are integral to the economies of many beach and resort towns.

There were nearly 15 million vacant homes in the U.S. in 2021—amounting to more than 10% of the total housing stock. But this was not some reserve of idle homes that could easily be tapped to address our nation’s housing shortage. Many (30.0%) of these homes, for instance, were only vacant temporarily while they were marketed to prospective buyers and renters, while others (11.0%) needed to complete renovations and repairs before they could be put back on the market. A well-functioning housing market needs some level of vacancy to allow households to move when and where they want.

An additional third (32.7%) of vacant units were being used as vacation or seasonal homes in 2021, while the remaining 26.3% were vacant for a variety of other reasons (e.g., foreclosure, legal proceedings, and family reasons) that cannot always be easily or quickly remedied.

The only meaningful way to address our housing shortage—and to ease the cost of housing—is to build more of it and double down on efforts to renovate and preserve our existing, aging stock.

Questions or comments on Research Notes should be directed to Chris Bruen, Sr. Director of Research, NMHC, at cbruen@nmhc.org.