Caitlin Walter is vice president of research at the National Multifamily Housing Council (NMHC) in Washington, D.C. She can be reached at cwalter@nmhc.org.

Many headlines tie the health of the apartment industry to job growth, especially at the local level. But are these numbers an accurate depiction of the dynamics of the job market much less a good barometer of apartment demand?

The employment numbers that get investors’ monthly attention are derived from what is called the establishment employment survey and represent the net change in the number of individuals employed from month to month—not the gross number of new jobs created. Why does this matter? The composition of our labor force today has the highest percentage of older workers in history, which means a tidal wave of retirement activity is about to hit. In fact, the number of workers retiring today sits at three times the number just 20 years ago and will only continue to rise as more baby boomers move toward retirement age.

Research from Pew Research Center and the Federal Reserve Bank of St. Louis reinforce this idea that the actions of the baby boomers, born between 1946 and 1964 (currently aged 55 to 73 years old), will have an outsized effect going forward on the overall employment situation. This Research Notes examines the impact that the baby boomers already have on the U.S. employment situation and predicts what their influence will be going forward.

Figure 1 shows the annual change in overall employment from the U.S. Bureau of Labor Statistics’ (BLS) Current Employment Statistics Survey (CES), the jobs numbers that are most often cited in the press. The CES reports the total number of individuals employed each month; however, these topline numbers can mask any number of different scenarios.

Figure 1 shows the annual change in overall employment from the U.S. Bureau of Labor Statistics’ (BLS) Current Employment Statistics Survey (CES), the jobs numbers that are most often cited in the press. The CES reports the total number of individuals employed each month; however, these topline numbers can mask any number of different scenarios. 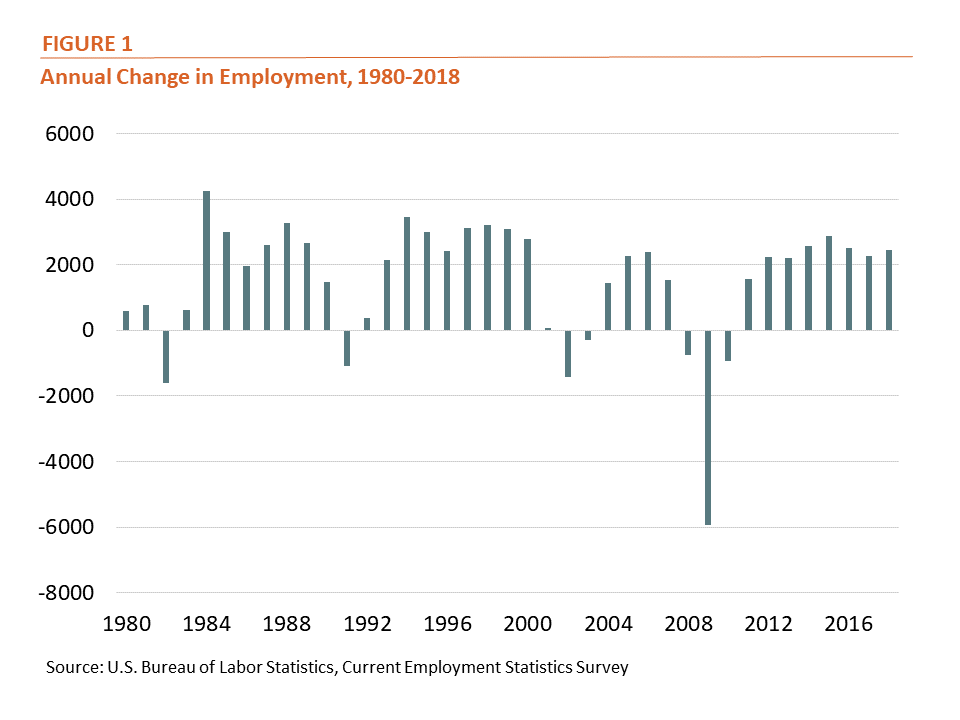 The overall numbers provide little context, however, and the only similarity evident is the approximate length of time where there has been job growth. It is unclear from the overall jobs numbers how many people actually lost or gained jobs as well as how many people simply retired without having their position replaced (which would also show up as a loss). To better understand how the employment situation is changing, it is necessary to look at the characteristics of the workforce, which are unavailable from the CES.

While the CES does not provide data on employment by age, an alternate survey, the Current Population Survey (CPS) provides labor force statistics that allow breakouts by age. The changing composition of the employed labor force—the share of 55+ workers is the largest since records began in 1948—indicates that the departure of workers aged 55+ will have more of an impact on the workforce than it ever has before. 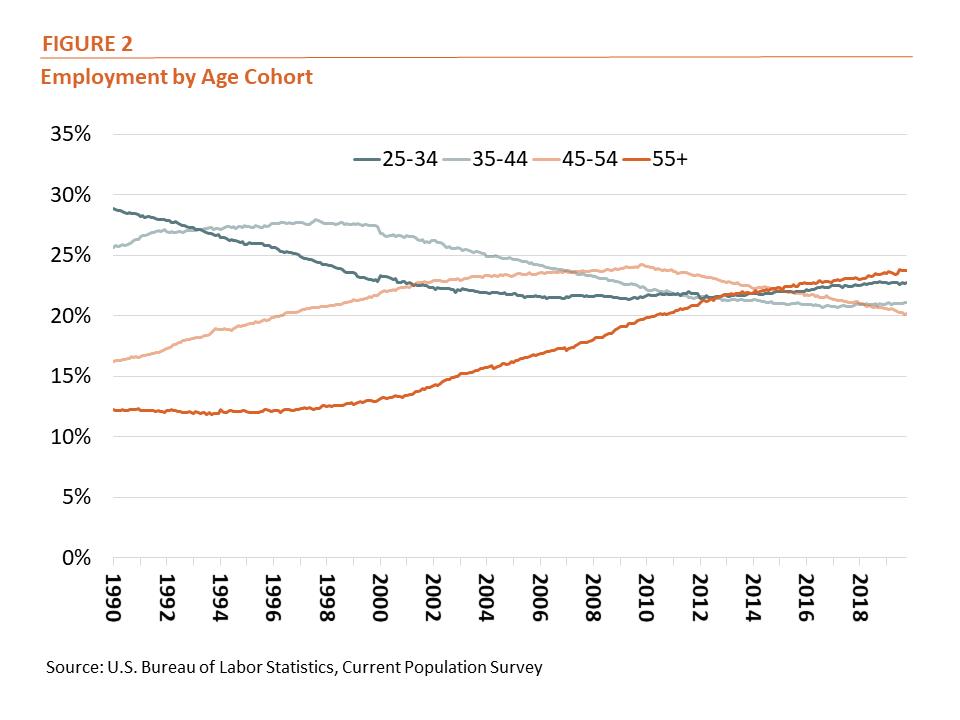 Figure 2 illustrates that the composition of the individuals employed during the 1991 to 2000 time period was very different than in the current period. The share of total employed who are aged 55 or older has grown in recent years as the baby boomers age, increasing from 12.2 percent of total employment in January 1991 to 23.0 percent in January 2018.

The Average Age of Retirement Is Older 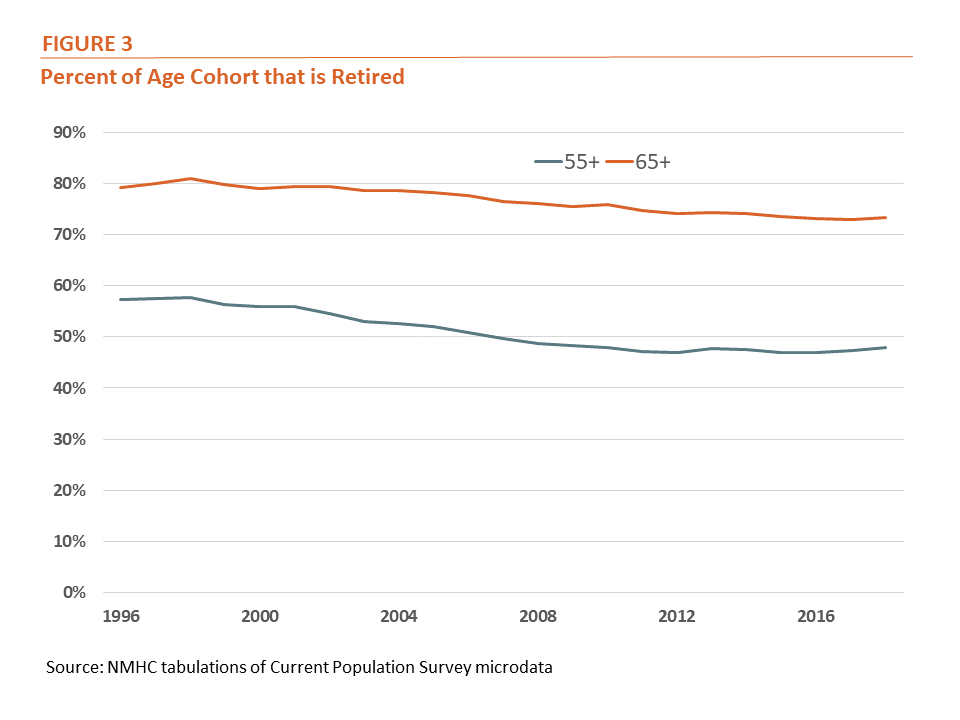 The percentage of the 55+ category that is not retired reveals that there are still a lot of retirements left to occur from the Baby Boomer generation. It does not, however, indicate the impact of retirements that are already occurring on the employment situation.

From 2000 to 2010, the nation averaged 356,000 new retirees a year. That number jumped to 1.2 million a year from 2010 to 2018. That means that any growth in the establishment employment survey would have to come on top of those 1.2 million jobs left vacant through retirements. Thus, in 2018, when there were 2.2 million net new jobs reported, the total number of people hired was closer to 3.4 million.

This stands in contrast to 2004, when a similar number of jobs was reported (2.1 million), but the number of new people hired was only 2.5 million. So, while the top line job numbers appear the same, the actual impact on the employment market and economy is significantly higher today due to the higher number of new workers needed to replace the much higher level of people retiring. 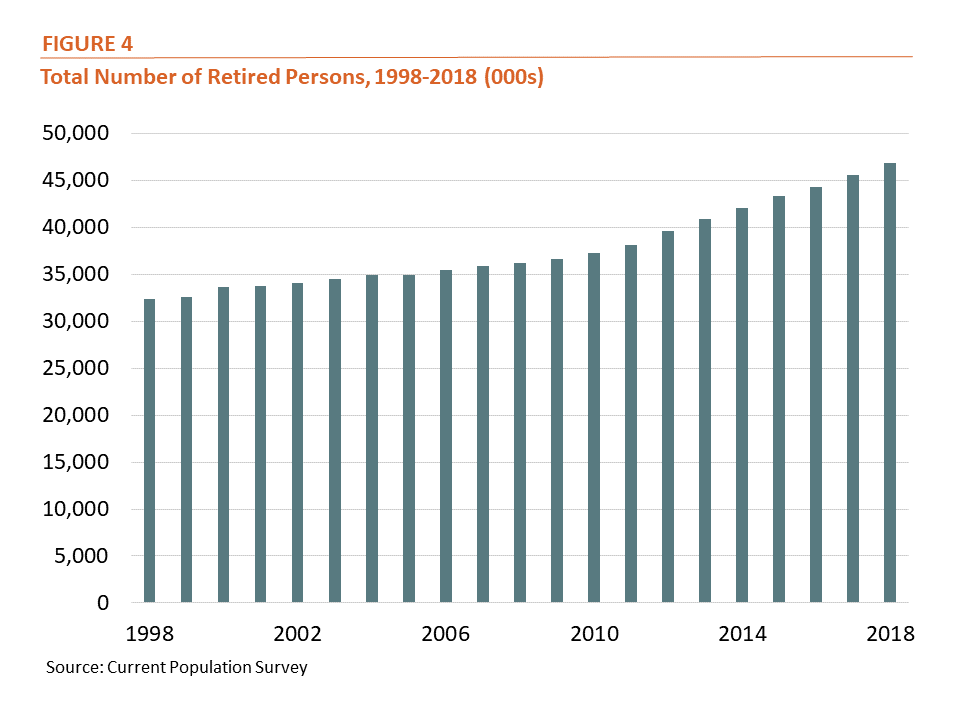 The volume of retirements occurring suggest that the job growth today is dissimilar to the job growth of the 1993-2001 time period and that this may be an entirely new situation. There were much fewer retirements occurring during that time period, and since the overall jobs numbers are net change, we need all those jobs to be backfilled, as well as new jobs created, to get to a positive number to make up for the baby boomers’ retirements.

We Likely Have a Lot More Room to Run

Putting all these components together also helps paint a picture for the future. As Figure 2 previously showed, the baby boomers are now the largest share of the employed U.S. population (25 years+). The number of retirements is already beginning to grow, but the delayed age of retirement and the sheer number of baby boomers left to retire or leave the labor force suggests that it is highly possible that we could still see negative jobs numbers. But the reality is much different; we still have a large number of new hires for a prolonged period of time.

If using jobs numbers to forecast apartment demand, it will be more important than ever before to know the underlying demographics and characteristics, particularly age, of the underlying employment base. The Job Openings and Labor Turnover Statistics (JOLTS) database from BLS, could be helpful going forward with estimates of openings, hires, and separations. Alternate data sources such as population and household growth may be more beneficial to utilize, especially since the retirees could serve as a large pool of apartment demand as well.

Questions or comments on Research Notes should be directed to Caitlin Walter, Vice President of Research, NMHC, at cwalter@nmhc.org.

Download the full PDF of the December 2019 Research Notes