Caitlin Walter is vice president of research at the National Multifamily Housing Council (NMHC) in Washington, D.C. She can be reached at cwalter@nmhc.org.

NMHC published its Housing Affordability Toolkit with HR&A Advisors in 2018 with the goals of both providing background on the underlying causes of the apartment industry’s affordability crisis and providing specific tools that could be used to help defray the cost of building new apartments, allowing more units to be built at a variety of price points.

We cited three main reasons for the worsening affordability conditions: (1) a chronic demand/supply imbalance, (2) a rise in the “lifestyle” renter (or renter by choice) and (3) an increase in overall development costs. Together, these factors created a scenario where it was increasingly difficult and expensive for lower-income renter households to find an apartment without becoming cost-burdened.

In the time since the publication of the Affordability Toolkit, there has been a pandemic-induced economic downturn, one that put lower-income apartment residents particularly at risk financially. This issue of Research Notes examines whether the affordability landscape for apartment renter households has changed with the changing economic conditions and how that impacts the findings in the original NMHC Affordability Toolkit.

The toolkit research found that there were 6.3 million net new rental households with a household income less than $75,000 created between 2000 and 2016, but only 3.2 million rental units affordable to those households were added during that period. This led to increased competition for those units and as a result, rising rents. Looking only at the apartment universe (rental units in buildings with five units or more), only in very recent years were completions keeping pace with the average of 266,000 new units needed[*] at a variety of price points each year to keep up with demand (see Figure 1). In 2016, there were 311,000 new multifamily units completed; by 2020, that number was 364,700. 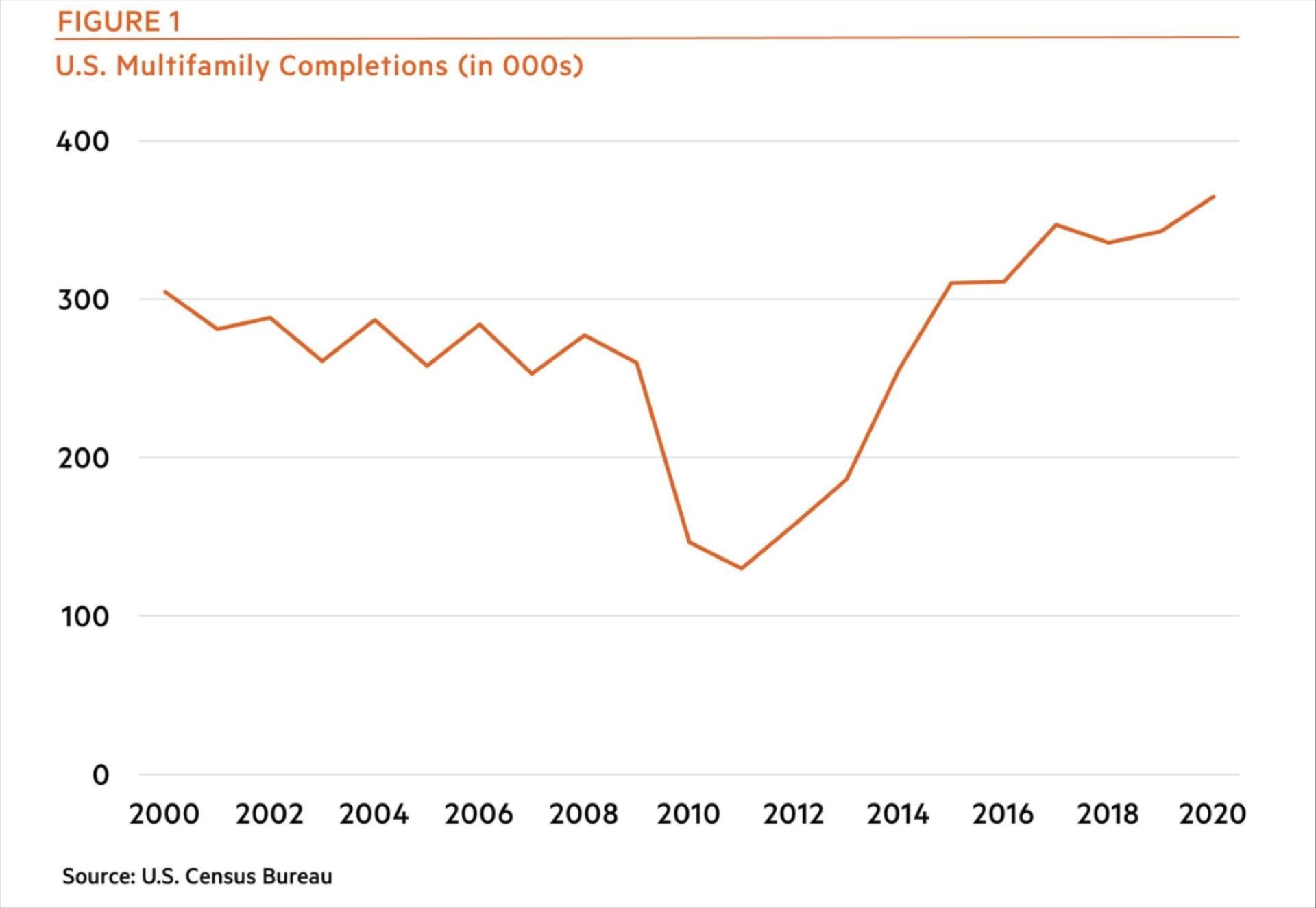 Dowell Myers and Jungho Park’s recent research for the NMHC Research Foundation further cemented  the lack of supply’s negative effect on affordability. The researchers found that record demand for apartments from middle- and higher-income households and constrained development in the aftermath of the Great Recession led to a lack of apartment filtering, where older stock naturally becomes more affordable. Put another way, this means there was so much demand for existing units that those units did not see declines in rent despite getting older. In a situation where there is enough housing being produced, older units would gradually become more affordable as newer, more desirable units were developed.

However, Figure 1 shows that completions in recent years have been at levels that meet the annual increase in demand for apartments. Does that mean we have built enough to make up for all those years when the demand was not met? Preliminary data suggest no.

In the professionally managed apartment universe, the Class C vacancy rate has always been the lowest; this remained true during the worst of the pandemic (see Figure 2). While the vacancy rate for Class C rose slightly in 1Q 2021 from the prior quarter, it was unchanged from 1Q 2020, which was largely before the pandemic hit. This is true for Class B as well; there was some increase in vacancy in the Class A space, rising 60 bps from 1Q 2020 to 1Q 2021. 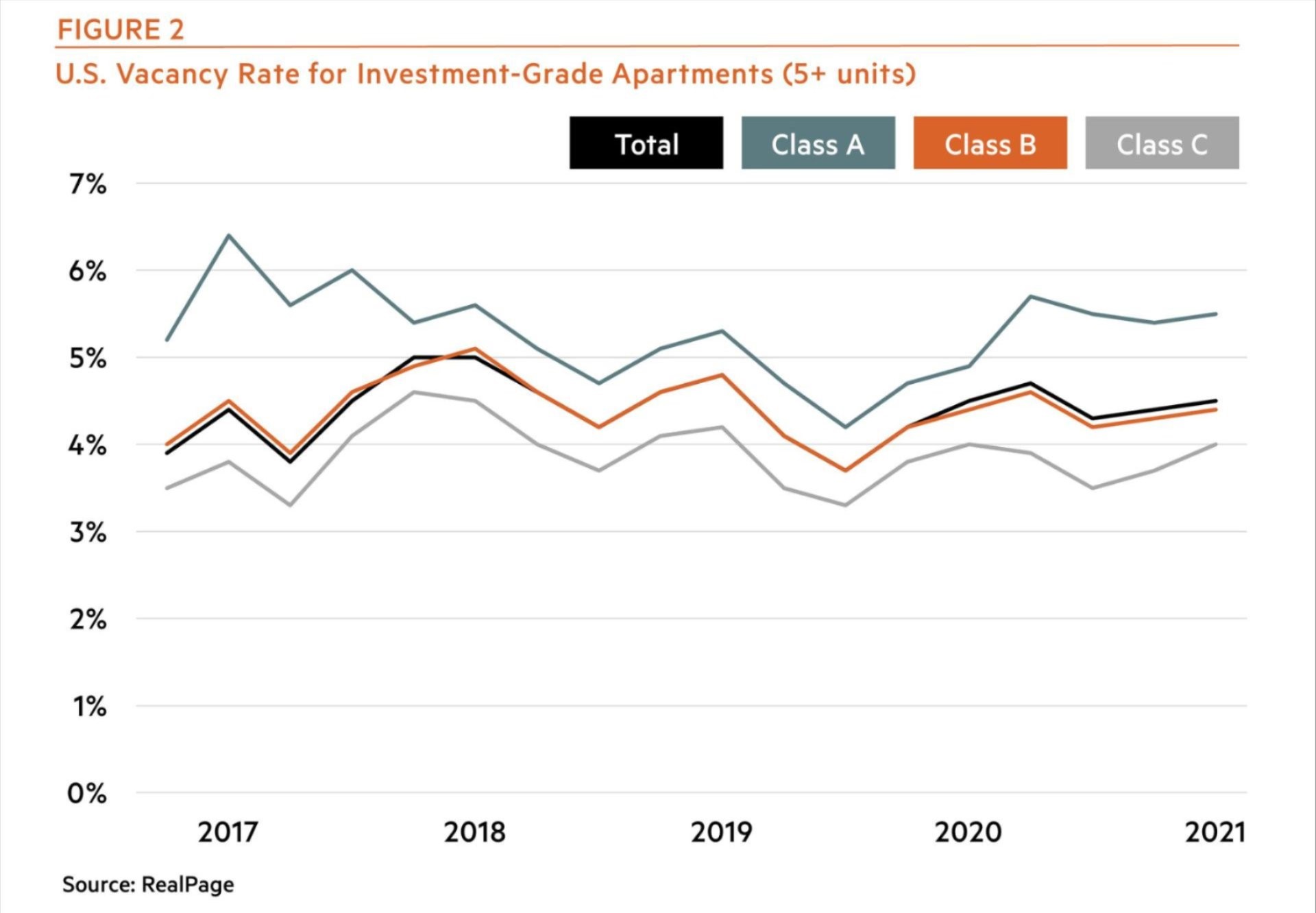 Our toolkit also cited income stagnation for middle-income households and declining incomes for low-income households as reasons for increased affordability challenges, with the real median renter household income falling 5.5 percent between 2000 and 2016. Unfortunately, most of the publicly available datasets have not yet published income data that take the pandemic into consideration, making it difficult to get a widespread view on the impact of the pandemic. However, the U.S. Census Bureau’s Household Pulse Survey gives some indications of which households were affected most. The survey presents information on respondents’ 2019 household income as well as employment disruptions related to the pandemic, allowing us to examine how the economic downturn impacted those who were already in low-income brackets pre-pandemic. Those that were already in a lower-income brackets saw more economic disruption than those in higher-income brackets; 66 percent of those that reported losing employment income immediately after COVID-19 related shutdowns reported a 2019 household income of less than $50,000 (see Figure 3). 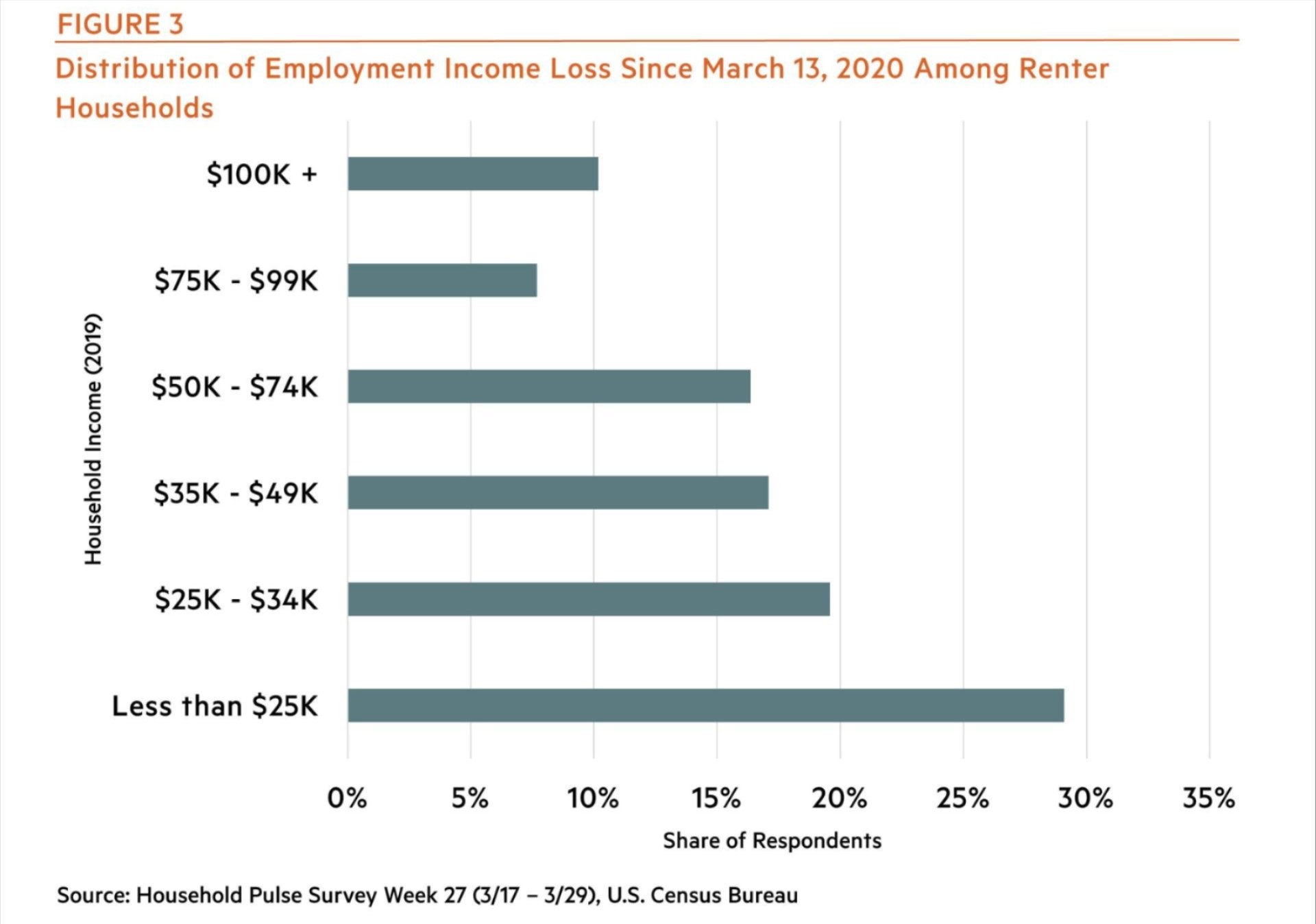 Additional questions in the Household Pulse Survey indicated that government assistance such as stimulus checks made a difference in renters’ ability to pay for basic needs—for the survey round after $1,400 stimulus checks started to be dispersed, 58 percent of renters either used or were planning to use the funds for food; 48 percent said they would use the funds to pay for utilities or telecom bills; and 55 percent cited rent payments.

As mentioned earlier, the toolkit highlighted that an increase in development costs was the final factor for rising housing costs. The study found that a variety of costs in the development process had risen, including the cost of construction materials and labor, which had risen 57 percent from 2000 to 2016. Additional research in 2018 by NMHC and the National Association of Home Builders (NAHB) found that the cost associated with complying with regulations had increased as well, accounting for 32 percent of the overall development costs. Increasing costs result in an increase in the rent needed to charge to make the project financially feasible.

As indicated in Figure 1, multifamily construction activity continued during the pandemic in 2020, but unknown is whether there was a change in the amount of construction activity or how costs may have changed because of changing economic forces. The NMHC Construction Survey, begun in March 2020, does provide that level of detail. There have now been seven rounds of the NMHC Construction Survey, and each time, issues that made it more difficult to build new apartments have been revealed. Respondents consistently reported delays in the construction timeline from permitting to starts, and materials scarcity has resulted in further delays and price increases.

Respondents also noted an increase in the repricing of deals as the survey rounds progressed, with more than two-thirds (69 percent) of respondents noting in the most recent round (conducted May 17 to June 1) that they have experienced deals repriced five percent or more, compared to no respondents in the fourth round (conducted July 6 to July 16, 2020) (Figure 4). 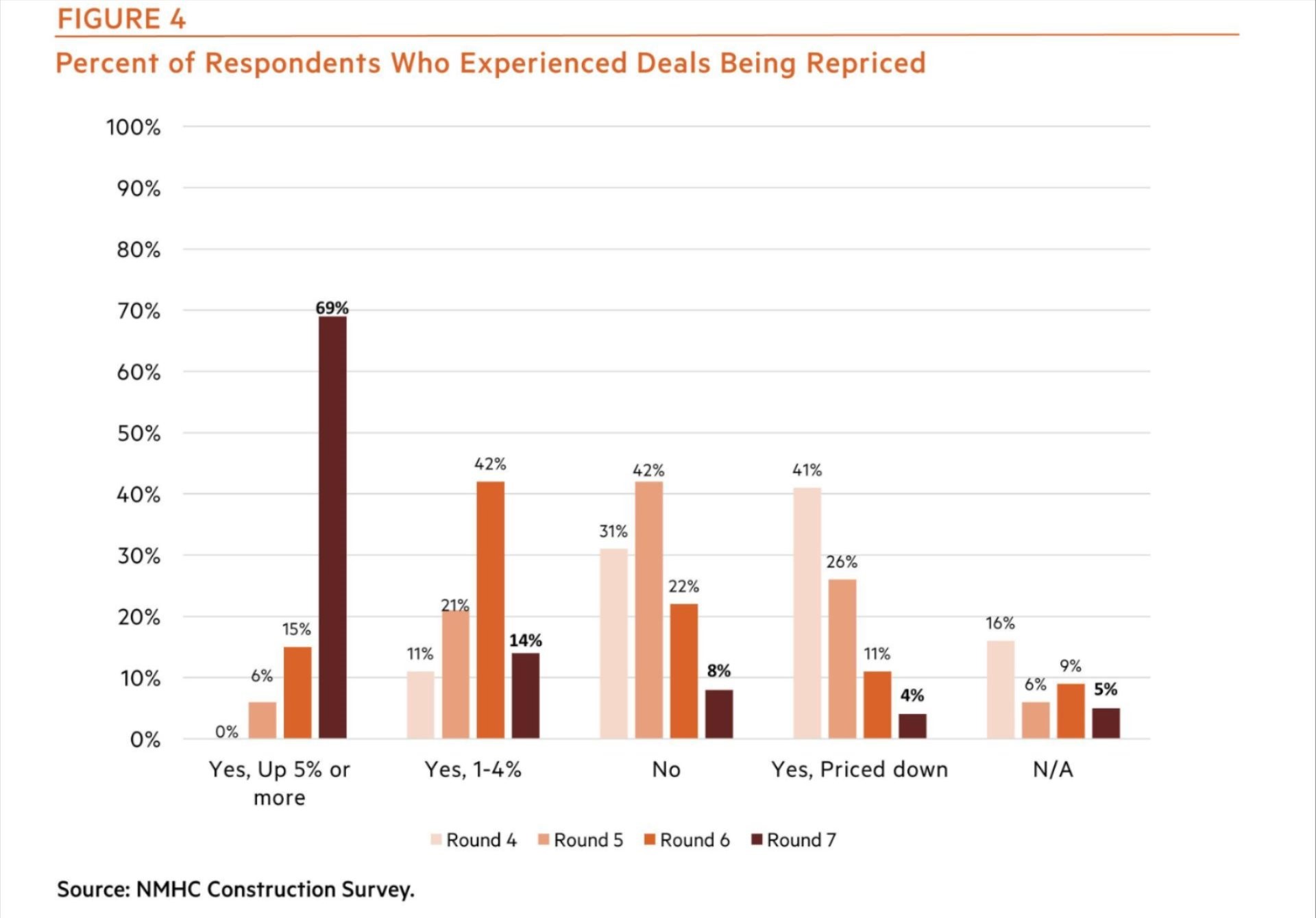 When the factors that led to increased affordability concerns in the apartment industry, as outlined in our original toolkit, are examined using updated data, it is clear that the situation has worsened.

Vacancy rates show that there is still a supply/demand imbalance, and the COVID-related downturn financially harmed those that were already struggling the most, continuing to make it difficult for those at the lower end of the income spectrum to find an affordable unit—even as data from the Household Pulse Survey suggest that temporary government efforts to mitigate the economic effects of the pandemic helped. Development costs also continue to rise, making it increasingly difficult to build new units at a variety of price points as is needed.

Given that these underlying factors are still a concern, the tools in our original Housing Affordability Toolkit are still relevant to explore as solutions to addressing the affordability crisis.

Questions or comments on Research Notes should be directed to Caitlin Sugrue Walter, NMHC's Vice President of Research, at cwalter@nmhc.org or 202/974-2343.

Download the full PDF of the June 2021 Research Notes