Apartment capitalization rates, or “cap rates”—defined as a property’s net operating income as a percentage of its price—have trended downward over the past two decades. According to apartment transaction data tracked by Real Capital Analytics, cap rates reached 4.7 percent in the fourth quarter of 2021, down 30 basis points (bps) from the prior year and marking the lowest rate since this data series began in 2001.

Yet, as high inflation persists and the Federal Reserve turns more hawkish, many in the investment community worry that increasing interest rates in the coming year might have an adverse effect on their apartment property values and result in rising cap rates for the first time in over a decade.

In this Research Notes, we examine the circumstances under which interest rate changes—along with other factors, such as expected rent growth and the risk premium demanded by investors—influence cap rates and what this might portend for the year ahead. We illustrate, specifically, why nominal interest rates may have less of an impact on cap rates than you might expect.

Interest rates influence borrowing costs for investors. For decades, declining long-term interest rates have bolstered the value of apartment properties, causing cap rates to decrease.[1] Still, Figure 1 illustrates that the correlation between long-term interest rates (represented by yields on the 10-year Treasury) and cap rates is not particularly strong. For example, the market yield on 10-year Treasuries increased from 3.6 percent in 2Q 2003 to 5.1 percent in 2Q 2006, during which time apartment cap rates decreased from 7.6 percent to 6.4 percent. Ten-year yields also rose from 1.6 percent to 3.0 percent between 3Q 2016 and 4Q 2018, while cap rates edged down slightly from 5.6 percent to 5.5 percent. And, most recently, 10-year rates rose from 0.7 percent in 3Q 2020 to 1.5 percent in 4Q 2021[2], all while apartment cap rates decreased to record lows.

[2] The 10-year has since increased even further. 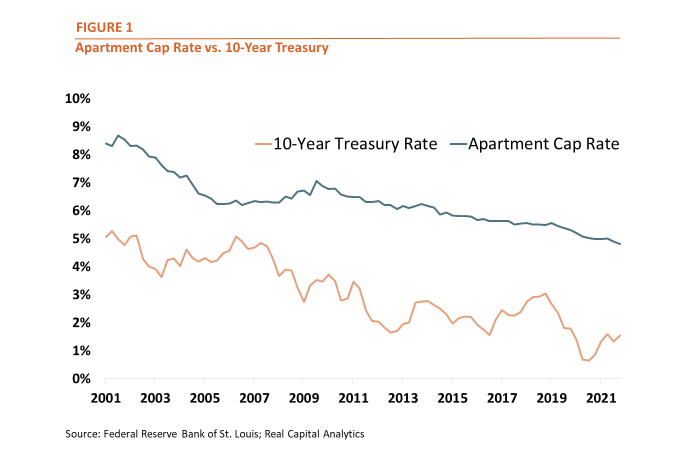 Cap Rates as a Real Rate of Return

Context around why nominal interest rates are rising is important. Since the most recent rise in 10-year Treasury rates was simply in response to higher inflation, there hasn’t been much of a change to the real, long-term rate of interest (see Figure 2). 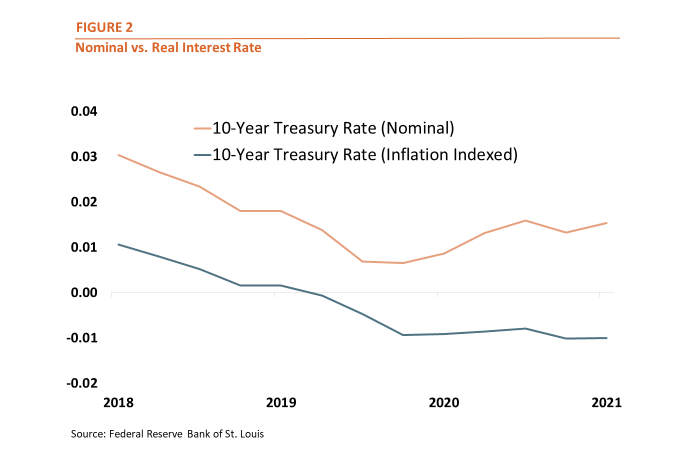 Apartments, given the short duration of typical leases, are uniquely positioned to re-price their rents to keep up with inflation. While the consumer price index rose 7.1 percent year over year in 2021 and 7.9 percent as of February 2022, rents for professionally managed apartments tracked by RealPage rose by an even greater 10.5 percent year-over-year for new leases and 8.1 percent for renewals as of November 2021.

If higher borrowing costs are offset by higher growth rates in rent and NOI, cap rates should remain unchanged. In other words, cap rates can be thought of more as a real rate of return, which are only affected by changes to the real interest rate.

The Impact of Rent Growth on Prices

Still, apartment rent growth has not kept up with inflation in every market or unit type over the past two years.. As we highlighted in our December Research Notes, the COVID-19 pandemic has had a downward effect on rent growth in many expensive, coastal markets, and especially among smaller unit types, as demand shifted toward larger units in the sunbelt and other secondary markets.

For instance, inflation (measured by changes in CPI) averaged 8.6 percent between 2020 and 2022, while rents tracked by RealPage rose an average of just 2.6 percent in Los Angeles, 2.2 percent in Boston, 2.1 percent in Seattle and 1.8 percent in Washington, D.C. Rents declined an average of 0.2 percent per year in New York and 6.3 percent per year in San Francisco during this two-year period. And, as is illustrated in Figure 3 below, rent growth over the past two years was even lower among one-bedroom and studio apartments. 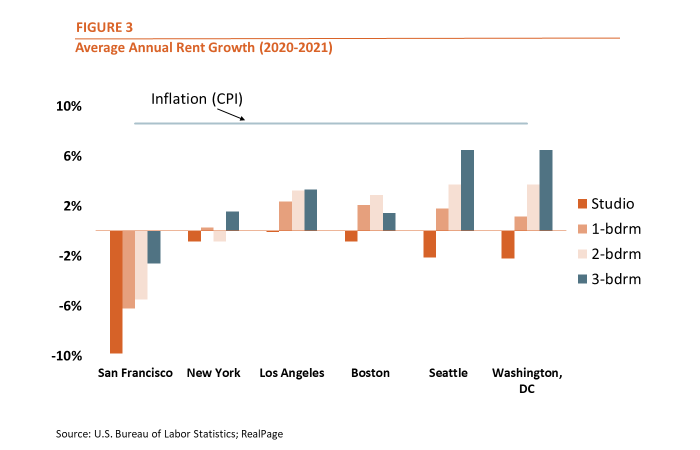 This negative shock to rent growth in coastal markets during the pandemic had a corresponding effect on the price of apartments—most notably in the San Francisco metro. Between 4Q 2019 and 2Q 2021, the price-per-unit of apartments dropped 18.0 percent in San Francisco proper, 5.6 percent in San Jose and 5.4 percent in the East Bay. We can observe a more muted effect in Washington, D.C., where the price-per-unit of apartments fell 3.4 percent during this 18-month period of the pandemic. These markets (shown in Figure 4) have since rebounded, but only prices in the East Bay had recovered to their pre-pandemic levels by the end of 2021. 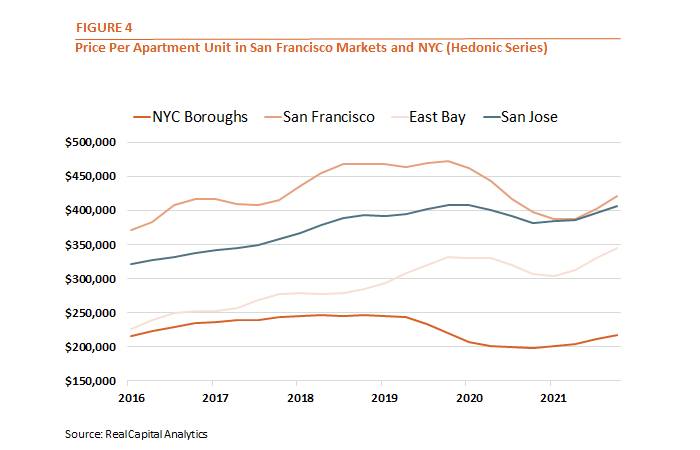 New York City is interesting because apartment prices were already on the decline in 2019, well before the U.S. outbreak of COVID-19. This fall in apartment values was most likely triggered by the passage of the Housing Stability and Tenant Protection Act in June 2019, which made New York’s existing rent control laws even more stringent. In October 2019, nearly half (47 percent) of respondents to the NMHC Quarterly Survey of Apartment Market Conditions said that they had either already cut back or were considering cutting back on investment in jurisdictions that had recently imposed rent control or were seriously considering doing so (42 percent of respondents claimed not to operate in these markets to begin with).

The fact that cap rates continued to decline over the past five years in nearly every market, including many where rent growth failed to keep pace with inflation, illustrates that apartment investors are becoming increasingly tolerant of risk in their search for yield in a world flush with liquidity and few viable investment alternatives. Apartment transaction volume rose 128 percent in 2021 to $335.3 billion, according to data from Real Capital Analytics, marking the largest annual volume of deal flow since the data series began in 2001. Even though some of this volume certainly includes deals that were put off during 2020 due to the outbreak COVID-19, annual deal flow averaged $241.1 billion throughout 2020 and 2021, which still is higher than all prior years on record. For perspective, the second-highest apartment transaction volume was recorded in 2019 at just $193.1 billion.

[3] We used Real Capital Analytics' hedonic series at the market-level due to higher volatility.

The effect of rising interest rates in the coming year will depend, in part, on just how much the Federal Reserve decides to raise short-term rates, as well as how long-term rates respond. Interest rate hikes that are too aggressive could put a damper on economic growth prospects, which would have an adverse impact on property values and upward effect on cap rates. Cap rates could also potentially face upward pressure in markets with diminished rent growth projections, as we have seen in the San Francisco and New York City markets over the past five years.

Still, apartment cap rates are fundamentally a real rate of return that should only be affected by changes to the real rate of interest. Apartments, given the short-term nature of their leases, are uniquely positioned to simply re-price their rents during inflationary periods in order to offset higher nominal interest rates. Even though the 10-year Treasury has already inched upward, the apartment market continues to benefit from historically high occupancy rates and rent growth, causing cap rates to further decrease.

Questions or comments on Research Notes should be directed to Chris Bruen, Senior Director of Research, NMHC, at cbruen@nmhc.org.