Regulation imposed by all levels of government accounts for an average of 40.6 percent of multifamily development costs, according to this research by the NMHC and the National Association of Home Builders (NAHB).

This research, based on a survey of 49 developers across the United States, also examined regulations and other factors that can impact whether development even occurs.

Three quarters (74.5 percent) of respondents said they encountered “Not In My Backyard” (NIMBY) opposition to a proposed development. Confronting that opposition adds an average of 5.6 percent to total development costs and delays the completion of those new properties by an average of 7.4 months.

The research asked detailed information about affordability mandates. Slightly less than half (43.8 percent) of respondents said their typical project was in a jurisdiction with inclusionary zoning, a regulation that requires developers to offer a certain number of apartments at below-market rents. Covering the costs of those lower rents, on average, resulted in a 7.6 percent rent increase.

As a result, 47.9 percent of developers said they avoid building in a jurisdiction with inclusionary zoning requirements. Fully 87.5% avoid working in jurisdictions with rent control. This translates into housing not being built in many areas where it is so desperately needed.

Identifying duplicative and unnecessary regulatory costs is a critical factor as we work to address the critical shortage of affordable housing facing this nation. 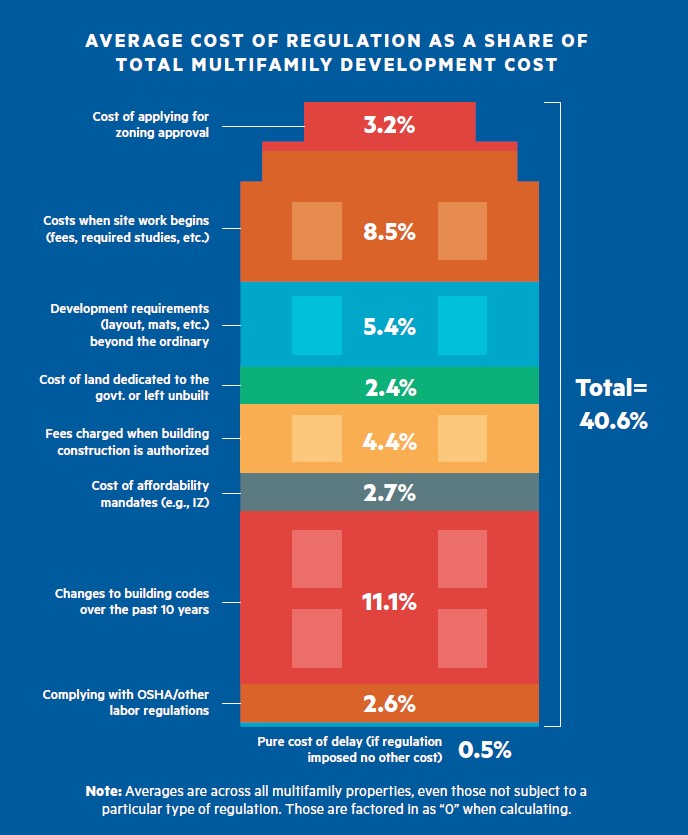 At a Glance - Cost of Regulations

Download a printable flyer highlighting the key findings from the Cost of Regulations Report.