Last week’s NMHC Fall Meeting was unlike any other—with record attendance and a jam-packed agenda, opportunity hung in the air as attendees and lawmakers talked solutions to our nation’s current housing challenges.

This meeting was also unique in that it was long-time NMHC President Doug Bibby’s last Fall Meeting at the helm, and incoming President-Elect Sharon Wilson Géno’s official introduction to NMHC’s membership. (See story below.)

“For me personally, this is a bittersweet event, as it is my last Fall Meeting as the head of NMHC,” Bibby said during his opening remarks. “That said, I am not going anywhere soon. I will be here until our Annual Meeting in January. And I will be working closely with my recently named successor—Sharon Wilson Géno—over the coming months to ensure a seamless transition.”

Throughout the week, a bipartisan, bicameral lineup of members of Congress, White House administration advisors, representatives from key government agencies, select national political reporters, leading economists and prominent attorneys joined the event. Each shared their views on a variety of topics, including the imbalance in the supply of housing; rent control; the Biden Administration's housing initiatives; financial strategies; and the Federal Reserve’s recent actions. The complete list of speakers can be accessed here.

Read on for the must-know takeaways from last week’s meeting.

What You Need to Know: Wilson Géno currently serves as executive vice president and COO of Volunteers of America National Services. Throughout her career, she has helped guide numerous for-profit, nonprofit and governmental entities on housing affordability, housing policy and related development and operational issues.

"I am incredibly excited to join the stellar team at NMHC—the leading voice when it comes to advocating for sensible, successful housing policy,” said Wilson Géno in the official announcement.

You Know You’re Curious: Wilson Géno recently sat down with NMHC Chair Ken Valach to chat about her background, why she chose to take on this role and next steps for the transition. Watch this interview now.

With the election just around the corner, lawmakers were laser-focused on touting what’s been accomplished thus far in the 117th Congressional Session, what they hope to still get done and what the impact of the election could mean going forward for both parties.

Conversation Highlights: The passage of the Inflation Reduction Act of 2022—and what happened behind the scenes to get it across the finish line—was one of the most talked-about pieces of legislation.

The Common Thread: But a sentiment that many speakers from both parties shared was the most noteworthy takeaway was what was not in the final draft: the proposed carried interest changes that would have negatively affected our industry.

“The fact that no huge tax increase package has passed in the first two years of the Biden Administration is a big deal and good thing for our industry,” NMHC's Matthew Berger said.

Say It Louder For The People In The Back: Supply + Subsidy = Solution

Housing has never been more front and center in the national narrative as it is today, especially as an inflationary environment squeezes household wallets and sends housing costs north.

What the Experts Said: No affordable housing solution was too taboo to discuss, and no solution was too farfetched to present last week as economists, housing agency leaders, Administration staffers, members of Congress and journalists considered everything from the cost of regulations to eviction mitigation and even rent control.

The Silver Bullet: Although the shortage of available housing clearly indicates we will have to build more, there was also much discussion around the critical need for subsidy for renters at the lowest income level.

“We’ve been building homes the same way for so long,” HUD Deputy Secretary Adrianne Todman said during her remarks about the new HUD “Our Way Home” program. “Let’s find other ways that could make materials and labor more affordable.”

Already in the Works:

The Jury Is Still Out On Possible Recession

The big question on everyone’s mind last week was seemingly simple: Are we headed into a recession?  Economists Dr. Jared Bernstein, senior fellow at the Center for Budget and Policy Priorities, and Mark Zandi from Moody’s Analytics shared their insights.

Bernstein’s Beliefs: Dr. Bernstein highlighted the Biden Administration’s recent efforts to combat inflation and the impact some of those measures—including hiked interest rates—are having on the economy. “The Fed is in a hiking cycle right now and Biden is supporting them,” he said. “He knows that the Fed is the No. 1 inflation fighter. And that [in the short-term] we also need a cooling job market.”

Zandi’s Bottom Line: The main takeaway from Zandi was that he’s confident we’re not in a recession right now; but whether one’s coming is another question. “When you look at the high job creation numbers, record lows in job layoffs, the elevated number of unfilled positions, the high ‘quit rate’ by workers because they are looking and finding other higher-paying jobs and consider that recent GDP figures are likely to be revised higher, it’s hard to think we’re in a recession,” Zandi explained.

What Could Change: “What could turn all of this around is energy prices, and if they are affected by a Category-5 hurricane shutting down some refineries, the European Union’s price caps on energy prove ineffective, or a high-strength COVID variant re-emerges this fall or winter,” he said. 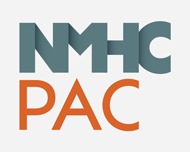 Thank You To Our Current NMHC PAC Supporters!

Your generous support allows NMHC PAC to continue strengthening our relationships with lawmakers on both sides of the aisle in Congress and effectively advocate for the multifamily industry on Capitol Hill. And as we gear up for a new Congress, this work is more important than ever.

We were proud to recognize current NMHC PAC supporters throughout the meeting via the NMHC PAC boards located near the badge pickup station and online. See Who Was There At The 2022 NMHC Fall Meeting

Revisit the best moments of the 2022 NMHC Fall Meeting and see your colleagues, friends and coworkers by clicking on our shared album here.